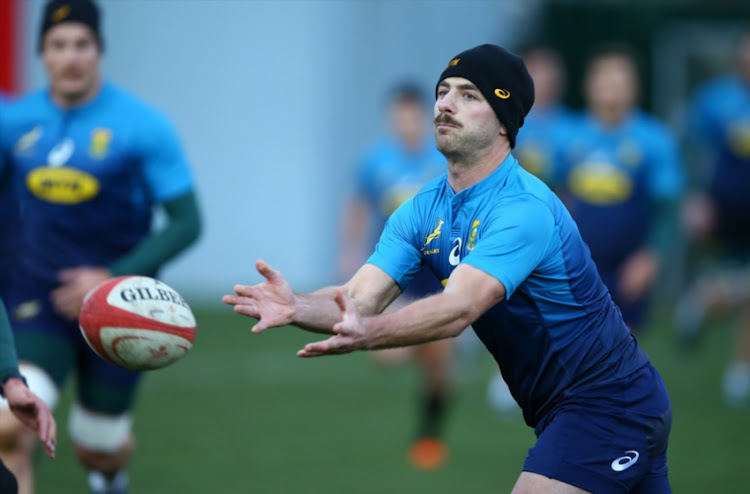 By the end of November players from the southern hemisphere are usually staggering to the finish line of a gruelling season‚ but even so‚ Springbok fullback Willie le Roux believes South Africa are ready for one final battle.

The Boks take on Wales at the Principality Stadium in Cardiff on Saturday‚ closing the curtain on a four-match November tour to Britain and France‚ and a 14-match Test campaign.

It will also officially mark the end of coach Rassie Erasmus’ first season in charge‚ which has so far yielded seven wins and six defeats.

But four of those losses have been by five points or fewer‚ while the Boks also beat the All Blacks in New Zealand for the first time this decade.

There has been a definite improvement in terms of performances and results for the Boks this year although defeat to Wales would leave the Boks with a modest 50% winning ratio in 2018.

Even so though‚ there have been no heavy defeats while Erasmus has re-established the Boks as a feared opponent.

Le Roux gave some insight into the change.

"We went back to our traditional way‚ how the Springboks play rugby‚" Le Roux told media in Cardiff.

"There was a stage where people did not fear the Springboks anymore‚ or the badge. We are getting that back through the structures Rassie has built.

"Everyone in the team is equal‚ and it makes a big difference.

"The guys are playing for each other more and we know what it means for our country back home. We enjoy going out and wearing the jersey."

The season started against Wales in Washington in June and will end against the same opponents at a venue where the Boks have lost their last three outings.

“The squad is looking forward to it‚” Le Roux said.

“This is the last game of the season for a lot of the guys‚ so one more week of hard work and they can have some time off.

"It’s your job and when you play for South Africa‚ you’re representing your country. To end the tour on a high would be unbelievable for the squad and the people back home.”

Including Saturday’s Test against Wales‚ the Boks only have five matches before Rugby World Cup 2019.

Erasmus has mentioned the tight time frame and lack of game time frequently in public as reasons why he has not always been able to experiment as much as he’d like.

But assistant coach Mzwandile Stick believes that the Boks have enough time to improve even more by next year’s showpiece despite so few Tests on the schedule.

"We've got a good relationship with our franchises back home. We get to keep in touch with our players and go and visit them‚" Stick said.

"Any boxes we want to tick‚ we make sure we follow up with the franchises and we monitor the players by giving them reports on how they are playing.

"We take every opportunity we get to make sure that our players get better.

"It's not only a disadvantage for us. All of the other teams probably have four games before they go to the World Cup‚ with the exception of the Six Nations teams.

"We knew that this was going to be the challenge that we were going to face and when it comes to the World Cup everyone will start from scratch and be in the same boat."