Rassie Erasmus part of the search for a new Bulls coach 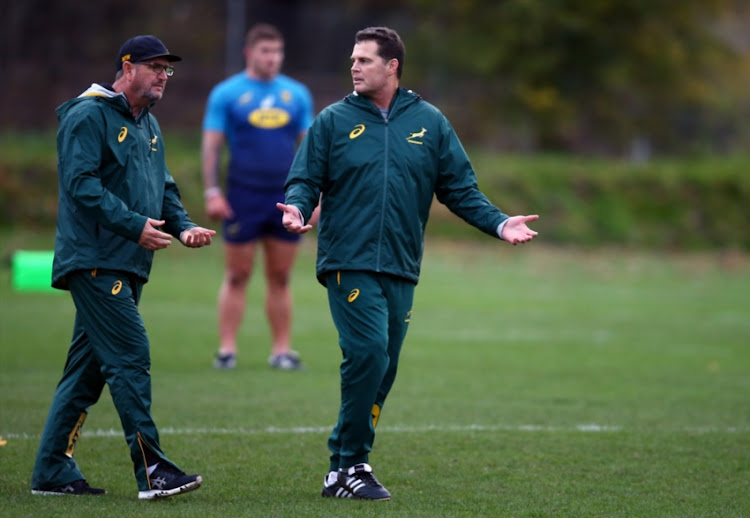 The Bulls have Springbok coach/director of rugby Johan “Rassie” Erasmus and his management team participating in the search for a new coach but they are running out of time.

Erasmus is currently on tour in the United Kingdom with the Springboks and with their last Test against Wales in November‚ there's a high possibility of the Bulls only finding their preferred candidate next month.

Blue Bulls Company High Performance manager Xander Janse van Rensburg found himself pinned down at the bottom of the question ruck but like most people in his position‚ preferred to be diplomatic about his responses.

The same applied in regards with the filling of the executive of rugby position Mitchell held alongside the Bulls Super Rugby head coaching job.

Currie Cup coach Pote Human and his coaching team are currently running the pre-season ship ahead of a coaching announcement.

“At this stage‚ I can only say that there's a process in place that we've followed and once we've done that‚ that'll lead to the candidate being appointed.

"We've got a process and we're following that process‚” Janse van Rensburg said.

“The executive of rugby position isn't something I can also comment on. That's a board decision and they'll elaborate on that when they feel they need to.”

While all eyes have been on former Springbok and Cheetahs wing Cornal Hendricks joining the Bulls last week after being cleared by a leading heart specialist in regards with the heart condition that curtailed his rugby involvement three years ago‚ the imminent signing of Schalk Brits alongside the acquisition of Bok number eight Duane Vermeulen has turned heads.

The Bulls have been reliant on Jaco Visagie and Edgar Marutlulle at hooker but with Adriaan Strauss having recently retired‚ they have seen a need to add experience.

At 37‚ it's not quite clear what Brits will offer aside from the experience that the younger hookers can provide.

However‚ Brits is travelling with the national team on the year-end tour and seems to be favoured option by Springbok coach Erasmus.

Bulls team doctor Hermann Rossouw said Brits's avoidance of major injuries in his career has allowed him to play on despite his advanced age.

“Schalk is a very good athlete and throughout his career‚ he was pretty fortunate that he hardly suffered from major injuries.

"Those are the ones that can accumulate in your career and shorten it in the long run‚” Rossouw said.

“The advantage that we have in regards with our training plans is that the player has a good idea of how much work they get through and how they manage themselves as the program monitors workload.

"The big question lies with the depth because when you're sorted in that regard‚ you can manage your players better.”