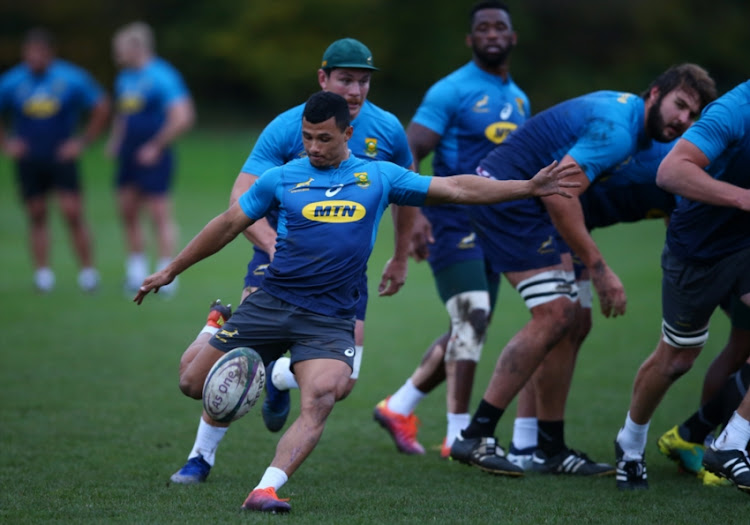 Embrose Papier will make his first Test start when the Springboks take on Scotland at Murrayfield this weekend after coach Rassie Erasmus awarded the youngster the No 9 jersey.

Lock RG Snyman is the only other change to the starting lineup from the side that beat France 29-26 in Paris last weekend.

Snyman replaces Pieter-Steph du Toit in the second row‚ with the latter moving to flank due and Warren Whiteley falling out with a calf muscle injury.

Lock Eben Etzebeth also hasn’t overcome a foot injury and was not considered.

Duane Vermeulen returns to No 8 while Du Toit is back to a position where has shone this year‚ especially during the Rugby Championships.

Scrumhalf Ivan van Zyl and lock Lood de Jager return to the bench after both missing the France clash after featuring in the 12-11 loss to England two weeks ago.

“Unfortunately Eben (Etzebeth) is still not fully fit and this which gives RG Snyman another great opportunity to start against one of the top rugby sides‚” Erasmus said.

“Moving Duane and Pieter-Steph around in the pack isn’t disrupting at all‚ as both of them are very experienced and have played for us in these positions earlier in the season.”

Meanwhile‚ flyhalf Handré Pollard will become the second most-capped Springbok No 10 when he make his 38th Test appearance on Saturday‚ surpassing 2007 World Cup winner Butch James’ 37 caps in that position.

The most-capped Springbok flyhalf is Morné Steyn‚ with 64 Tests at pivot.

The fact that Erasmus only made two enforced changes is an indication of how highly rated the Scots are. They boast a formidable home record under coach Gregor Townsend‚ with nine wins in their last 10 internationals at Murrayfield.

Along the way they have beaten Ireland‚ Australia‚ England and France among others.

“Scotland is a well-coached side‚ they are difficult to break down and they will present us with a very tough challenge at Murrayfield‚” said Erasmus.

“The matches in the northern hemisphere are all closely fought encounters‚ with the set-piece battle key‚ and it’s important to grab the big moments and finish your opportunities.”

Papier has yet to convince at this level but with conditions expected to be dry in Edinburgh on Saturday‚ he will have a chance to show off his pace and natural attacking instincts of the coach lets him off the leash.

Over the course of the first two matches on tour Erasmus has asked borh De Klerk and Van Zyl to rain kicks down on the opposition back three‚ with mixed results.

Papier has slowly developed his kicking game‚ but it is not the major strength of his game and it will be interesting to observe whether Erasmus allows the Bulls halfback some latitude.

Wedged between Vermeulen and Pollard‚ Papier is surrounded by quality and experienced players‚ which will certainly make his first start as comfortable as it can be in a hostile environment.