Pieter-Steph must play regardless of the number on his back 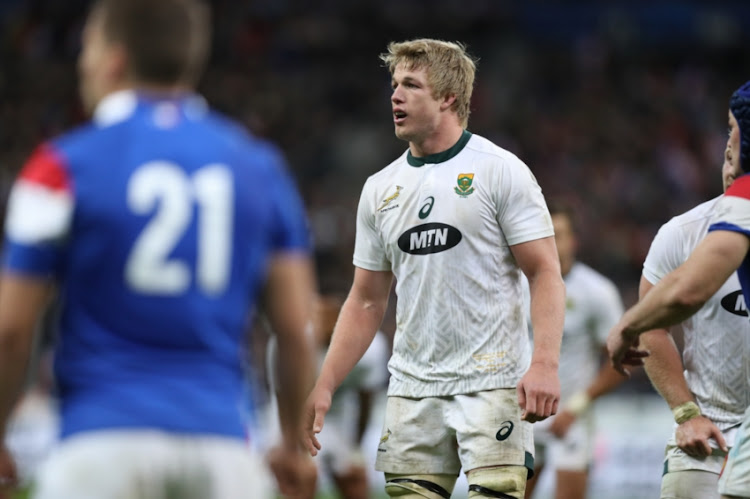 Pieter-Steph du Toit doesn’t really need a number on his back to define himself as a rugby player because the man who started professional rugby as a lock has become a vital dual operator in the Springbok pack.

After some tentative experiments with Du Toit at blindside flank between 2012-2017‚ current Bok coach Rassie Erasmus has been more serious about the role for the 1.98-metre athlete.

Du Toit could wear the No 7 against Scotland this weekend having played lock in the first two matches on tour – the 12-11 loss to England and the 29-26 win over France.

Du Toit’s speed and high work rate are perfect attributes for a backrower‚ but he also brings the power and lineout prowess of a world-class lock.

In many ways he is the perfect hybrid player and because he is so comfortable in both positions‚ Erasmus has flexibility when it comes to his reserves.

The coach can go for two locks on the bench‚ or he can have two loose forwards.

Du Toit is the ultimate team man and although he always makes the right noises about playing where the team needs him‚ he did admit in Edinburgh that he enjoys the outings at flank more.

“I probably would say that I prefer playing at 7 at the moment though‚” Du Toit told the media in Edinburgh.

“It’s where I’m able to get my hands on the ball a bit more and get involved in the loose play. I’m just enjoying my rugby and the coaches have put all the right structures in place‚ which has really helped.”

Du Toit‚ who played three Tests at flank in the Rugby Championship‚ two at lock and made one appearance from the bench‚ led the tackle stats with 86 in the tournament.

He carried the ball 270 metres from 53 carries‚ made five tackle breaks and won lineouts and turnovers. He was a complete all-rounder and he has carried that form into the current tour.

In the two matches so far‚ Du Toit has made 31 tackles‚ won eight lineouts and carried 18 times for 85 metres.

With Warren Whiteley unlikely to play this weekend because of a calf injury‚ a move back to flank is probable‚ although the Boks are still unsure if Eben Etzebeth will recover from a foot injury sustained against England.

If Etzebeth doesn’t make the cut then Du Toit would probably stay in the second row. In some ways that might work for the Boks against a team‚ under coach Gregor Townsend‚ that likes to up the tempo of the game.

Du Toit’s ability to cover ground like a looseforward while playing in the second row would give Erasmus the option to pick Francois Louw in tandem with Siya Kolisi and Duane Vermeulen in the back row this weekend.

“The Scots are a smart team and they’ll find a place to target us and try make the game fast to tire us out a bit‚” Du Toit said.

“They are also very technical when it comes to contesting at lineout time and stopping the mauls‚ so we will need to ensure our plans are spot on.”