All eyes on Malcolm Marx as Boks storm Paris 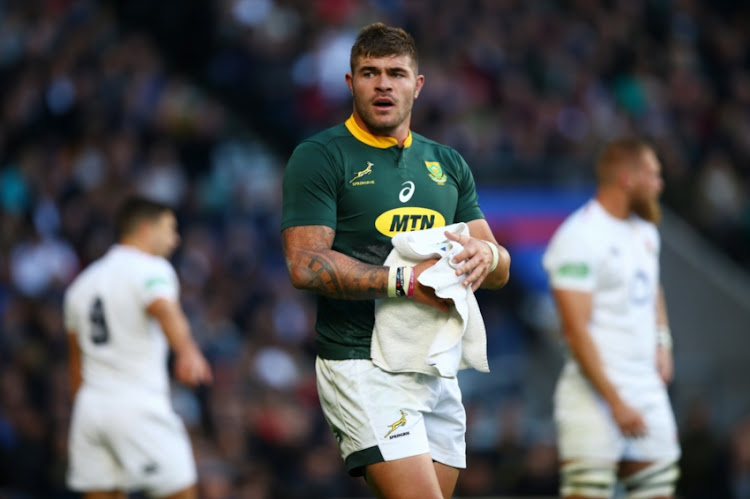 Springbok hooker Malcolm Marx will be the man under the most pressure in Paris on Saturday night after his throwing-in horror show against England last weekend.

The Springboks’ northern hemisphere tour started with a 12-11 defeat because at least three gilt-edged attacking lineouts‚ metres from the England line‚ ended in turnovers with Marx missing his targets like a struggling salesman.

Even with the minimum of analysis France will know to put Marx under pressure from the outset.

The lineout‚ when employed effectively is a devastating attacking weapon and a brilliant defensive aspect of the game. But when throws are sprayed aimlessly then it becomes a liability.

The Boks gifted England defensive turnovers last week‚ which cost the tourists points after they did just about everything else right. France will be itching to test Marx’s mettle in the 44th meeting between the sides.

There is also a sense of irony that Stade de France is where the Springboks‚ with Victor Matfield and John Smit in their pomp‚ gave one of the greatest lineout exhibitions in the modern game.

Matfield almost singlehandedly won the 2007 World Cup final by poaching six England throws and disrupting many others while he and Smit connected seamlessly on the Boks’ own ball to keep England at bay.

Smit is in Paris as an analyst and hopefully he and Marx have talked over a cup of coffee this week.

The burly Lions hooker is a brilliant rugby player – perhaps the best player in the loose in the game currently. But if he continues to falter under pressure when throwing in his other attributes are nullified.

It might help that provincial teammate Franco Mostert is back in the starting lineup this week‚ replacing the injured Eben Etzebeth‚ after missing the Twickenham clash. Mostert is Matfield‚ to Marx’s Smit. And that can only be a good thing for the under-pressure Bok hooker.

The return of Faf de Klerk at scrumhalf should also improve the Boks’ speed from the base of rucks after Ivan van Zyl doggedly played under instruction to keep the Boks in good field position last week. De Klerk’s experience and natural instincts on both attack and defence will pose tougher questions for France than Van Zyl asked of England.

Willie le Roux’s return at fullback in place of Damian Willemse is another boost. Willemse was very good against England but his chances were limited in a suffocating environment‚ although he still found room to step half the English backline in one magical moment.

Le Roux doesn’t have Willemse’s twinkle toes but he does have vision‚ pace and timing. The 50-cap veteran ghosts into space at deceptive speed‚ which often stresses defences.

The three changes are all positive for the Boks while the bench‚ with Cheslin Kolbe back in the mix‚ also has some X-factor.

But as usual the foundation will come from the forwards and outside of the lineout – they were magnificent at Twickenham last week.

The scrum went well‚ barring one penalty when England loosehead prop Ben Moon scrummed with his shoulders facing Harrods and his bum pointed at Heathrow‚ and yet still won a penalty against the unfortunate Wilco Louw.

It ultimately proved the difference between winning and losing and Louw has been dropped for Vincent Koch this weekend.

In the loose the pack bullied England on the gainline‚ while the breakdown was tidy but not decisive. Another performance like that against Les Blues and the backs will have a wonderful foundation to make good on.

France coach Jacques Brunel expects the Boks to rain kicks down on his wings as they did at Twickenham and as a consequence has dropped wing Gael Fickou. Instead Damian Penaud‚ usually a centre with a strong kicking game‚ will operate on the wing.

“We expect a lot of kicking from the Springboks to the flanks and I think Damian has a little more to offer in this area‚” Brunel said.

“Fickou is still in the team as a substitute and has made a really good start to the season. He is physically strong but we prefer not to change the centre partnership of [Mathieu] Bastareaud and [Geoffrey] Doumayrou.

“It’s hard to know what to expect from the Springboks. These past seasons‚ they’ve had a different game.

“We know that the physical intensity will be there‚ but I’m not sure they have a rhythm‚ especially if there is rainy weather.”

In the previous 43 meetings between the sides the Boks have won 26 and France 11‚ with six draws.

At home France have won fewer than they have in SA. They have five wins‚ 13 losses and one draw in 19 games played in France.

In Paris France have won three of 11 clashes with the Boks winning seven‚ including the last two in 2013 and 2017.