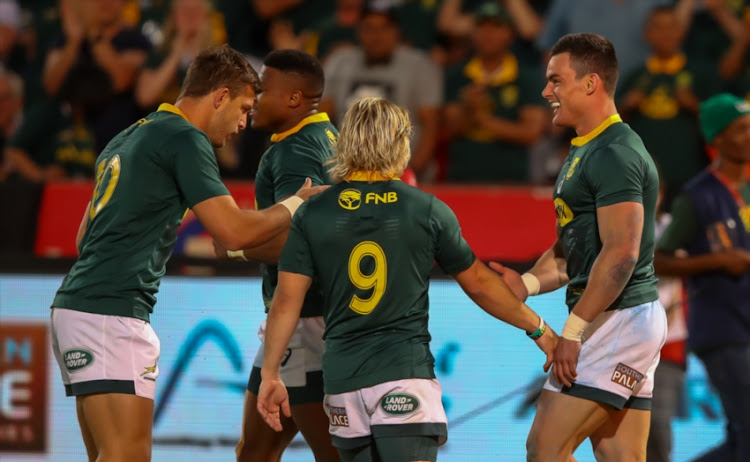 Springboks congratulate Jesse Kriel of the MTN Springboks after his try during the Rugby Championship match between South Africa and New Zealand at Loftus Versfeld on October 06, 2018 in Pretoria, South Africa.
Image: Gordon Arons/Gallo Images

The 2021 British & Irish Lions tour to South Africa will be the shortest in the storied history of the composite team after an agreement on player welfare in Britain was agreed on Tuesday.

The Lions‚ who tour every four years to one of the southern hemisphere’s big three – Australia‚ New Zealand and South Africa – is an anachronistic ensemble that survived‚ and even thrived‚ in rugby’s switch from amateurism to professionalism 22 years ago.

But the Lions’ survival has come at a cost because the time for what used to be a three-month tour‚ no longer exists.

Commercially the Lions are a massive money-spinner for the host country and the longer they‚ and their fans‚ are in a country‚ the better it is for the host. But that period has been compressed.

In 1888 the first British team toured Australia and New Zealand and played 35 matches. The first tour to SA in 1891 consisted of 20 matches.

The 2021 tour‚ which will celebrate 130 years of clashes between South Africa‚ and South African provincial sides against the Lions (they’re weren’t called the Lions until 1910)‚ will only have eight matches. Three of those will be Test matches.

Although the official schedule is not out yet‚ the shorted schedule‚ which will take just five weeks‚ was agreed as part of rugby’s international restructure towards a global season starting in 2020.

That decision was made in San Francisco at a World Rugby meeting in 2017. But Tuesday’s list of new guidelines regarding protocols around rest for English players‚ has ended any chance of the tour remaining at 10 matches as it has been since the Lions were last in SA in 2009.

The 2021 Lions tour will start at the beginning of July and end in early August – the latest it has been in the professional era.

The 2021 English Premiership final will only take place on June 26 that year‚ meaning several key players might be overlooked for the tour as they will have no time to prepare with the Lions. The PRO 14 will finish at least two weeks earlier‚ which would favour Irish‚ Welsh and Scottish players.

After the epic Lions tour to New Zealand in 2017‚ which ended 1-1 with the third Test drawn‚ coach Warren Gatland called for more time to prepare the team. In this scenario‚ there will be less time for the Lions to prepare and fewer games to build towards the first Test.

Tuesday’s announcement by the Rugby Football Union (RFU)‚ Premiership Rugby and Rugby Players' Association (RPA) confirmed that English rugby would introduce guaranteed in-season breaks for players as part of the structure for the next three seasons means inevitable ramifications for the Lions tour.

“It is fundamental that players had their say in the shaping of this new season structure and I must commend the hard-work and diligence of the RPA Players’ Board throughout this lengthy process‚” RPA chief executive Damian Hopley said.

“This new agreement gives players guaranteed in-season breaks for the first time and reduces playing thresholds‚ while protecting the five-week post-season break that was already in place.”