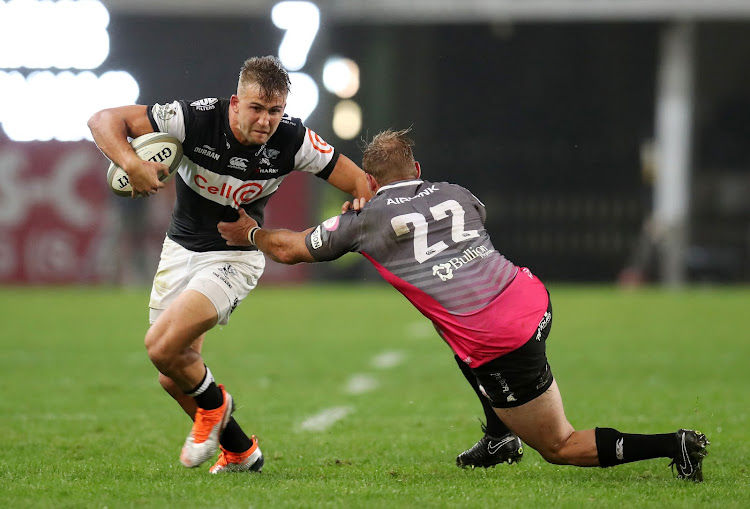 Jeremy Ward of the Sharks evades a tackle from Jerome Pretorius of the Pumas during the Currie Cup match at the GrowthPoint Kings Park in Durban on September 7, 2018.
Image: Muzi Ntombela/BackpagePix

The Sharks are familiar with the Currie Cup play-off territory they find themselves in but taking it to another level is a different story.

Last season the Sharks coasted through the round-robin stage only for them to encounter difficulty in the semi-finals.

While they laboured past the Blue Bulls‚ the venomous Western Province side battered them in the showpiece game.

Sharks centre Jeremy Ward has seemingly taken in last year's lessons and isn't looking past Saturday's first Currie Cup semi-final where the Sharks will be hosting the inconsistent but dangerous Golden Lions.

“We've been speaking about consistency as a unit for a long time and to get two consecutive home semi-finals is a really good achievement‚" he said.

"However‚ it's all about taking it one step further now.

“The conditions in Durban are different at this time of the year so we're used to the field and the weather definitely plays into our hands.”

While the Sharks are aware of their play-off stage meltdown last year‚ it's clear they haven't taken their qualification for granted.

However‚ the Golden Lions unit they'll be facing this time around will be a stronger side that could contain Elton Jantjies and Warren Whiteley.

Ward said they needed to be positive for Saturday while also understanding that the Golden Lions are going to be a sterner proposition as compared to the last time they met in the round-robins stages.

In wet conditions at Kings Park on September 22‚ the Sharks eased past 37-21.

“Knockout rugby does mean a lot though‚" Ward said.

"We've worked hard to get here and the boys are hungry.

"It's all really about channeling the hunger and making sure we're in the right frame of mind.

"Bonus points don't count but if the opportunities are there‚ you have to take them because we can't change our style of play. We're an exciting team but if there are points on offer‚ we have to be willing to take them‚” Ward said.

“The Lions have some players back and they're going to give us a different challenge from the last time they played us. We've worked hard on our defensive shape this week and we need to keep to our system."

Western Province Currie Cup coach John Dobson said they were thrilled to procure a result against the Blue Bulls despite the conditions they played ...
Sport
3 years ago
Next Article