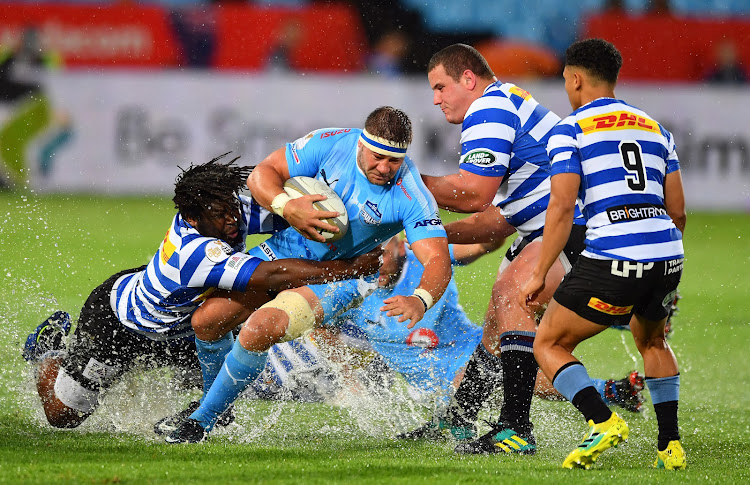 Ruan Steenkamp of the Blue Bulls tries to evade a tackle during the Currie Cup game between the Blue Bulls and Western Province at Loftus Versveld in Pretoria on October 13 2018.
Image: Johan Rynners/BackpagePix

Western Province Currie Cup coach John Dobson said they were thrilled to procure a result against the Blue Bulls despite the conditions they played on.

The kick-off in Saturday’s Currie Cup clash between the Blue Bulls and Western Province at Loftus Versfeld was delayed by 15 minutes because of adverse weather condition.

A massive storm blew in and unleashed torrential rain and lightning. Western Province were leading 34-7 at half-time when the game was called off.

According to SA Rugby’s regulations‚ a half of rugby is enough to constitute a game.

Western Province needed a point to top the log after the Sharks beat the Griquas in Kimberley.

Dobson’s side went one better and sealed the deal in 40 minutes before the weather closed in.

Last year against the Golden Lions‚ the players were hauled off the field because of lightning but came back on to finish the game.

"Last year against the Golden Lions we came off for a lightning break but we were in an unusual position of having to score four tries or win the game in a half.

"I don’t think there’s a new format of rugby called T40 or something but to have that whole experience in a half‚ I just felt sorry for the substitutes because I didn’t use them.

“We were absolutely thrilled to get a result like that in those conditions.

"To get the result in those conditions was superb.

"When message came in that we may only get a half of rugby in‚ you could only ask the players to play with intensity and for them to do damage in the manner they did‚ they responded very well. It was exceptional.

With Western Province topping the log‚ another installment of the North/South Derby will take place in Cape Town on Saturday.

The Bulls weren’t expected to beat Western Province when the latter’s seasonal form is taken into account.

Dobson though said they needed to leave a calling card in terms of what the Bulls may expect at Newlands on Saturday.

“What I wanted to do‚ even though I’m not sure if we’ve done so‚ is to make it seem daunting for the Bulls to go to Cape Town next week.

"Chris van Zyl’s talk this week was about that and maybe some of our play in this game may have done so.

"However‚ this is a special group‚” Dobson said.

“They’re not going to be complacent and they’ll also be aware that the conditions also favoured us in the game.

"We had the experience and some mistakes were made from early. We know it’s not going to be easy next week.”

The Bulls dominated possession and territory but each time the visitors got into the Bulls’ 22‚ the forced mistakes or got points.

“The message was the same for both teams but Western Province played the better rugby. We made too many mistakes and we wanted to play rugby in the conditions.

"They dealt with us in the scrums‚” Human said.

“It was very disappointing because we said before the game that we can’t play rugby in these conditions.

"We got out there‚ we played and made mistakes and Western Province capitalised on our mistakes. Every time we made a mistake‚ they scored.”