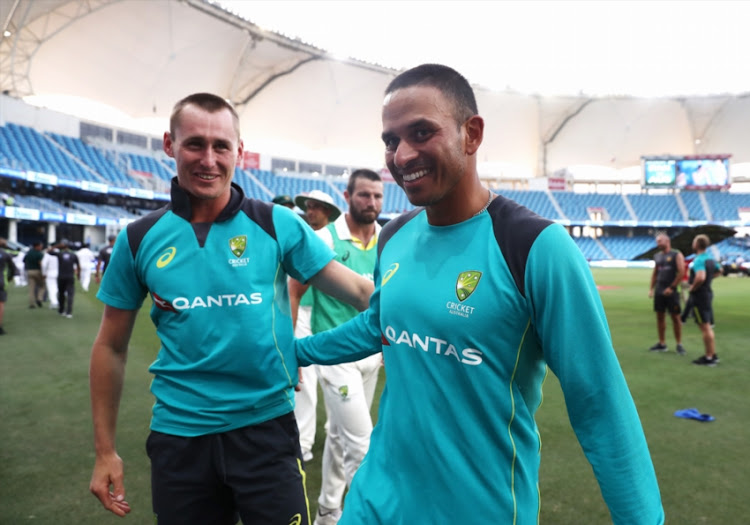 Usman Khawaja and Marnus Labuschagne of Australia celebrate after Australia held on to draw the test match during day five of the First Test match in the series between Australia and Pakistan at Dubai International Stadium on October 11, 2018 in Dubai, United Arab Emirates.
Image: Ryan Pierse/Getty Images

Klerksdorp has given the world more than its fair share of prominent people.

The newest member of the club is Marnus Labuschagne‚ the leg spinning allrounder who made his Test debut for Australia against Pakistan in Dubai this week.

South Africans are used to their compatriots popping up in England’s cricket team. But Australia’s?

Unlike Bloemfontein-born Kepler Wessels‚ who moved Down Under when international cricket’s doors were closed to players from apartheid South Africa and played 24 Tests for Australia‚ Labuschagne didn’t have much say in the matter.

His family moved there in 2004‚ when he was 10‚ after his father landed a job in the Australian mining industry.

Labuschagne junior‚ whose first language is Afrikaans‚ learnt to speak English at school in Brisbane.

He captained Queensland in the 2012-13 national under-19 championships.

Klerksdorp’s other Test cricketers‚ who both played for South Africa‚ are Peter Carlstein‚ the middle order batsman who had eight Tests from February 1958 to January 1964‚ and Martin van Jaarsveld‚ who owns nine Test and 11 one-day caps.

Klerksdorp’s Dewald Nel has played 10 ODIs and 10 T20s for Scotland‚ and Davy Jacobs has been named captain of Canada — whose T20s will be recognised as full internationals from January 1.

Springboks Jacques Cronjé and André Esterhuizen are also from the North West town‚ as is Italy international Quintin Geldenhuys.

And Phil Masinga and Daylon Claasen‚ Bafana Bafana players both.

Vivian Herbert “Boet” Neser‚ a Rhodes scholar who played 18 first-class games for Oxford and Transvaal‚ won the Military Cross in World War I and became a South African Supreme Court judge in 1944.

Eben Dönges of Klerksdorp was a journalist and lawyer who was Minister of Posts and Telecommunications in the first cabinet named by the National Party in 1948.

He was acting Prime Minister after Hendrik Verwoerd was assassinated on September 2‚ 1966‚ and was due to succeed C.R. Swart as State President on June 1‚ 1967.

But before Dönges could take the oath he suffered a stroke and was in a coma until his death on January 10‚ 1968.

And then there’s Klerksdorp’s own Desmond Tutu‚ a strident voice of clarity and courage against apartheid who served as the Anglican Bishop of Johannesburg and the Archbishop of Cape Town — and was awarded the 1984 Nobel Peace Prize.

Ten years later the sniffy staff at Lord’s still didn’t know who Tutu was‚ and refused him entry to the pavilion because he wasn’t wearing jacket.

But‚ in the same building in 2008‚ he received a standing ovation after presenting the Spirit of Cricket address.

“True‚ the [1994] match did have some difficult moments‚” Tutu told his audience.

“I seem to recall a captain with dirt in his pockets [England’s Michael Atherton] and an archbishop who was thought to be improperly dressed for the pavilion.”

Back in Klerksdorp‚ they couldn’t care less about dress codes.

And‚ in a dusty mining town‚ there’s probably dirt in everyone’s pockets.