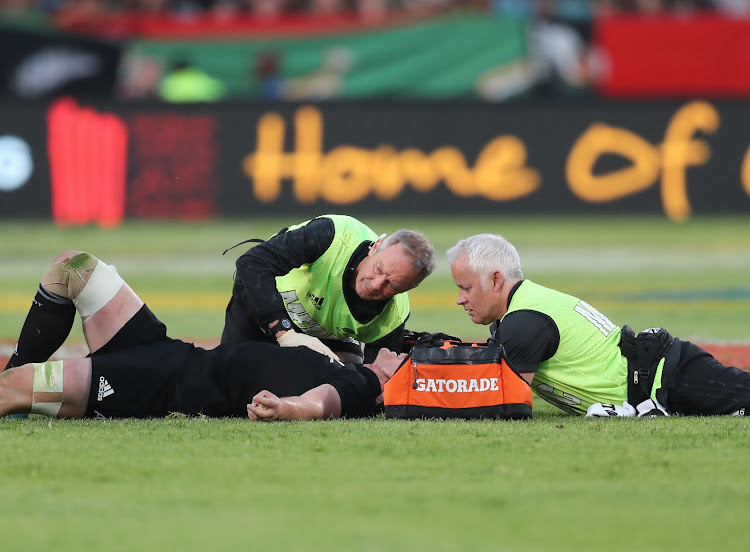 All Blacks flank Sam Cane fractured his neck in the Rugby Championship clash against the Springboks on Saturday and will be sidelined for months.

Cane‚ however‚ did not suffer nerve damage which would have had more severe consequences for the tough as teak fetcher.

The tweet in which the All Blacks revealed the extent of his injury on Sunday‚ suggested Cane is expected to make a full recovery.

“All Blacks Doctor Tony Page said Cane had suffered a fracture in a vertebrae but thankfully had not suffered any nerve damage.

Cane will stay in South Africa for the week before flying home. Will be out of rugby for several months‚” the tweet read.

Cane stayed down after a ruck in the 36th minute following a collision with Springbok No8 Francois Louw. He joined a ruck trying to clean out Louw and his head seemed hit the Bok No8 in his hip area.

Cane fell to the ground on his back and Louw almost immediately realised his fellow loose forward was in trouble.

After a long delay Cane got to his feet and flanked by support staff on either side and very gingerly departed the field.

He was replaced by Ardie Savea who ended up scoring the winning try as the All Blacks overturned a 30-13 deficit into a 32-30 win.

Although the All Blacks medical staff indicated he will make a full recovery‚ the injury will be a serious setback for Cane and his prospects of earning selection for next year’s Rugby World Cup.

New Zealand coach Steve Hansen has cast his selection net wide this season and there will be several candidates to fill Cane’s boots in Japan.

Springboks give the All Blacks plenty to think about

Despite their disappointing finish the Springboks gave the All Blacks much to mull over in their 32-30 Rugby Championships defeat at Loftus.
Sport
2 years ago

All Blacks coach Steve Hansen happy with his bench's performance

His hand was partly forced but All Blacks coach Steve Hansen was content that his bench did everything expected of them as they helped reel in the ...
Sport
2 years ago
Next Article