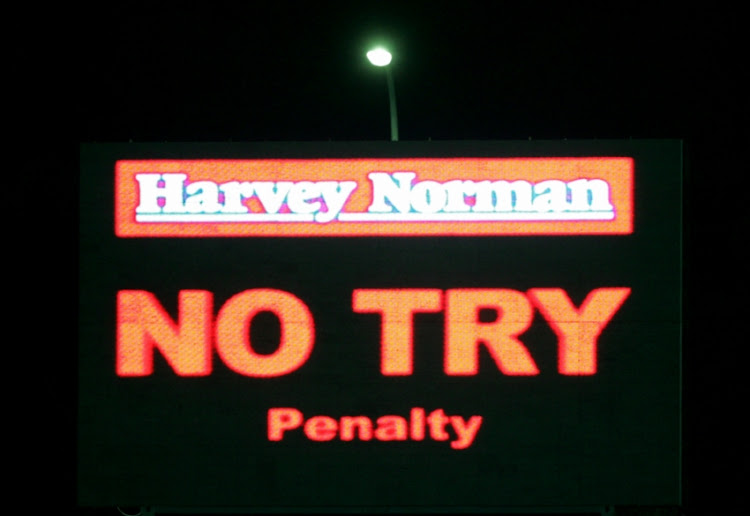 A 'no try penalty' display is seen on a big screen after a video referee's decision during the round 10 NRL match between the Parramatta Eels and the Sydney Roosters at Parramatta Stadium on May 16, 2008 in Sydney, Australia.
Image: Matt Blyth/Getty Images

The pervasive influence of Television Match Officials (TMO) in rugby is set to be curbed when World Rugby trial some limiting measures on the fourth official during the November Test window.

While the use of the TMO is part of the rugby fabric and has largely improved the sport‚ there has been a tendency in recent years for referees to cede more and more power ‘upstairs’.

The global trial‚ which starts next month‚ aims to reinforce the notion that referee is in charge of a match and has to guide the TMO‚ not the other way around.

In these trials‚ which were used in Super Rugby‚ the TMOs influence will be reduced to two key areas – determining if a try was legally scored and assisting in serious foul-play decisions.

World Rugby wants to encourage the official on the field to make more decisions in real time. In other words‚ they want less reliance on TMOs to reduce time wasting‚ while maintaining accurate decision-making.

The pillars of the new trial‚ which was approved by all member unions at World Rugby’s recent meeting in Sydney‚ are:

-Try scoring should be an on-field decision with the referee being responsible‚ but the team of four can all contribute.

-The current list of potential infringements for which a TMO can be referred will be retained‚ but any referral needs to be prompt‚ clear and consistent.

-The ‘on the run’ chat between the match officials and TMO for foul play will be removed with the onus on the referee‚ who should only refer to the TMO issues that are clear and obvious serious acts of foul play‚ including penalty kick‚ yellow card or red card as a potential sanction in order to protect player welfare.

-Match officials can review foul play up to when the game restarts‚ when a penalty is kicked to touch and when foul play footage becomes available.

-Proposal to include live broadcast of the TMO in action.

Of course‚ this being rugby‚ the grey areas have been further clouded. Point two says the ‘referral needs to be prompt‚ clear and consistent.’

That suggests that it didn’t need to fulfill those criteria previously‚ and it also leaves the definition of ‘prompt’ open to interpretation.

But the underlying principle of make the referee the sole arbiter of decisions is a sound one.

World Rugby Council Member and Rugby Committee Chairman John Jeffrey said: “In reviewing the current global protocol alongside the Super Rugby protocol‚ the group agreed that for this trial we should place greater emphasis on on-field decision-making‚ with the TMO role limited to try-scoring and serious foul play‚ while also removing the ‘on-the-run’ conversations between the TMO and team of three match officials.

“While we hope that the revised protocol will have a positive impact in terms of time impact on the game and accuracy‚ as with any trial‚ we will undertake a full review after the November window before determining whether to proceed.”