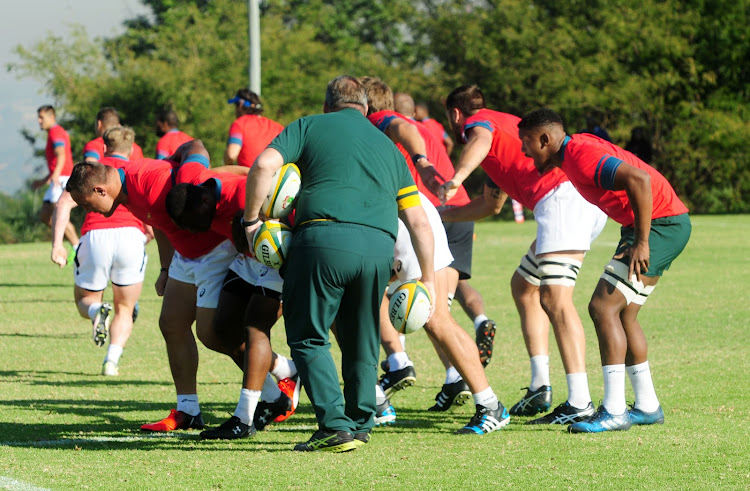 The Springboks are bracing themselves for an intense scrum and mauling battle against New Zealand when the two sides meet in the Rugby Championship at Loftus on Saturday.

The All Blacks have highly experienced scrummagers such as Codie Taylor‚ Scott Barrett‚ Owen Franks‚ Dan Coles and Sam Whitelock‚ and they troubled the Springboks in Wellington three weeks.

They are expected to be a handful again in the nation's capital on Saturday.

Looking ahead to a highly anticipated showdown that could see the Springboks complete a rare double over the sworn enemy‚ Bok assistant coach Matt Proudfoot acknowledged that the All Blacks boast a powerful pack.

“They are a fantastic scrumming unit and we know it is going to be a huge challenge at scrum time‚” said Proudfoot.

“If you look at the last two games in depth‚ our pack has evolved and for that I will give the players credit.

"The players are coming up with plans and they want us as coaches to help them to improve and that is my focus.

"We know the enormity of the All Blacks scrum but my emphasis is on what our guys can do in the aspect of the game.”

During their last meeting‚ the All Blacks dominated the match with 76% possession‚ 71% territory and they forced South Africa to make a whooping 287 tackles.

But Proudfoot said they have to match the visitors if they are to win in front of what is expected to be a packed Loftus.

“We have a young and improving group with players like Malcolm Marx who is 24‚ Steven Kitshoff is 26‚ Wilco Louw is 24‚ Frans Malherbe is not that old at 27 and the same is with Vincent Koch who is 28‚" he said.

"Bongi Mbomambi is 27 and he is playing some good rugby at the moment.

"We want this group of players to mature and be relied upon in big matches like these."

Proudfoot still has captain Siya Kolisi‚ Eben Etzebeth and whoever will come in at No8 between Warren Whiteley‚ who faces a late fitness test‚ and Sikhumbuzo Notshe to add value during the scrums and mauls.

“The maul is a crucial weapon to rugby because it puts eight forwards in one space and creates space for the backs to take from‚" he said.

"I think it is a very important platform to maintain the integrity of world rugby because if you have a team that scrum well you keep the opposition’s flanks bound and allow your backline to attack flat on them and create momentum.

"If you look at the way the All Blacks attack‚ they use that platform very well.”

Proudfoot also said that Bulls prop Trevor Nyakane is working hard to return to the side.

“I have four quality tight heads and Trevor is working very hard to be back at where he was‚" he said.

"If you watch how Argentina struggled at scrum time against New Zealand‚ we have to be smart with our selection in that department.

"We have learned a lot as a front row and I am pleased as a coach to see the amount of work the players are doing to up skill each other.”

All Blacks want revenge against Boks

If the Springboks think that the All Blacks will show any complacency when the sides met at Loftus on Saturday having already secured the Rugby ...
Sport
3 years ago

Bok No8 Sikhumbuzo Notshe in line to face the All Blacks

Sikhumbuzo Notshe is in line to start his second Test match for the Springboks when they take on this season’s Rugby Championship winners New Zealand ...
Sport
3 years ago
Next Article