WP appear unstoppable in the defence of Currie Cup 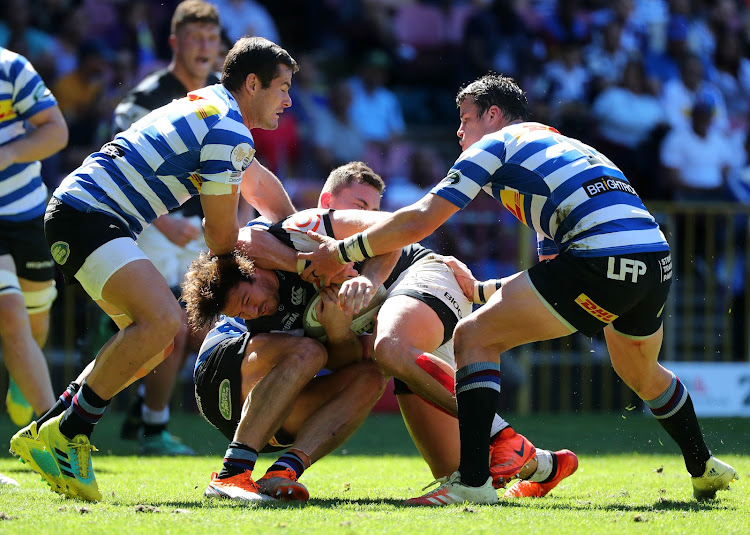 Marius Louw of the Sharks tackled by Dan Kriel of Western Province during the 2018 Currie Cup Rugby match between Western Province and The Sharks at Newlands Stadium, Cape Town on 29 September 2018.
Image: ©Chris Ricco/BackpagePix

Western Province coach John Dobson believes that his side survived a tough test on their way to a 50-28 Currie Cup win over the Sharks at Newlands on Saturday‚ and are the better for it.

The Sharks appeared to be out of the game at 31-7 down after 26 minutes‚ but they fought back to bring themselves within three points early in the second half.

That was the period where Dobson felt his team showed its growing maturity by weathering the onslaught and finishing strongly.

“It was the first time we have been really tested this season when the score closed to 31-28. They had momentum and we were under pressure‚” Dobson said.

“I’ve seen countless teams give up in that situation‚ but the way we clawed out way back into the game to score three tries‚ speaks volumes about our character.

“This is a very good Sharks side with lots of Test experience and to score 50 points against them at Newlands was special.

“I don’t want to carp about things‚ but we probably allowed them one or two line breaks too many‚ which is something we can work on.

“Our physicality was excellent though‚ which was something we asked from the guys.”

The win ensured that WP have a home Currie Cup semi-final with one match to go and they need just one point from their final match against Blue Bulls at Loftus to secure top spot in the overall standings.

That would mean a home Currie Cup final if they progressed through the semis.

Sharks coach Robert du Preez was disappointed with his side’s failure to take chances but praised their ability to stay in the contest until the final 10 minutes after being blown off the park in the opening half hour.

“We were disappointing at times but did really well to come back‚” Du Preez said. “There were lapses in our game today.

“But we have to give WP some credit because they took their chances and deserved the win.

“Maybe we did engage them too much on their own terms. It certainly didn’t go our way in the first 30 minutes but I liked the character the boys showed to take it to a situation where we had a chance to win the game.

“Ultimately it’s a wake-up call that we have to go back and work a lot harder. There are no major injuries but it was a tough encounter.”