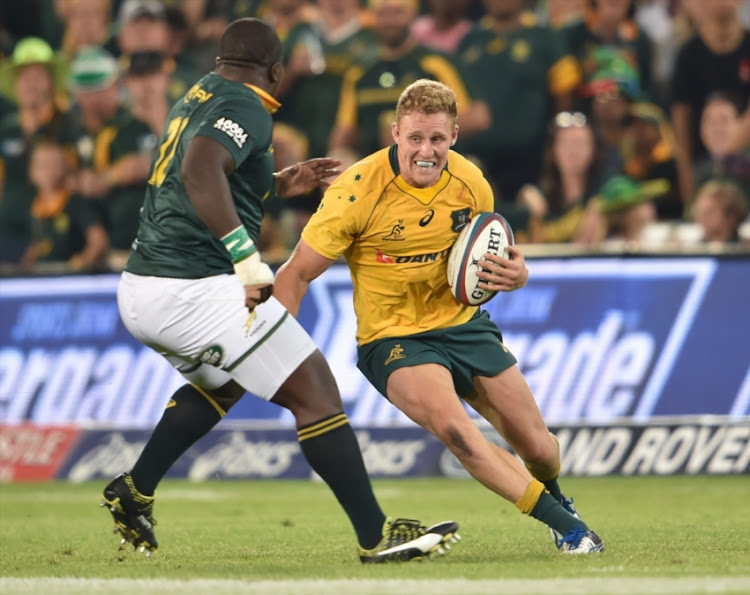 Reece Hodge of the Wallabies during the Rugby Championship 2017 match between South Africa and Australia at Toyota Stadium on September 30, 2017 in Bloemfontein, South Africa.
Image: Johan Pretorius/Gallo Images

Australia are hoping that hosts South Africa will buckle under the pressure from eager home fans in the Rugby Championship on Saturday after the Springboks upset world champions New Zealand away in their last test.

Utility back Reece Hodge is expecting to face a buoyant Springbok side, who scored an upset 36-34 win over the All Blacks in Wellington two weeks ago in the southern hemisphere championship.

But he is counting on the burden of expectation weighing on their shoulders in front of their fans in Port Elizabeth.

“They are going to be a lot more confident but there is also going to be a fair amount of pressure on them,” he told a news conference on Tuesday.

“They’ve had a great win over the All Blacks but their fans — like ours — are going to want to see some consistency. It’s a huge game for them, as it is for us.

“Both teams are kind of on the verge of building some serious momentum going into the end-of-the-year tests, and we cannot afford to let another opportunity slip,” Hodge added.

“There is a lot stacked up against us this weekend. It’s up to us to just go about our business and just focus on ourselves.”

While South Africa were registering a rare success in New Zealand a fortnight ago, Australia lost for only the second time at home to Argentina and have now been beaten three times in four Rugby Championship games this year.

The week off before traveling to South Africa for Saturday’s test at the Nelson Mandela Bay Stadium was opportune, said Hodge.

“It has given us a chance to go away and figure out, both individually and as a squad, what we want to get out of this tour and what we need to bring to ultimately get those results.”

The Wallabies are under fire after slipping to seventh in the world rankings, having lost a home series to Ireland in June and then failing to impress in the Rugby Championship tests over the last two months.