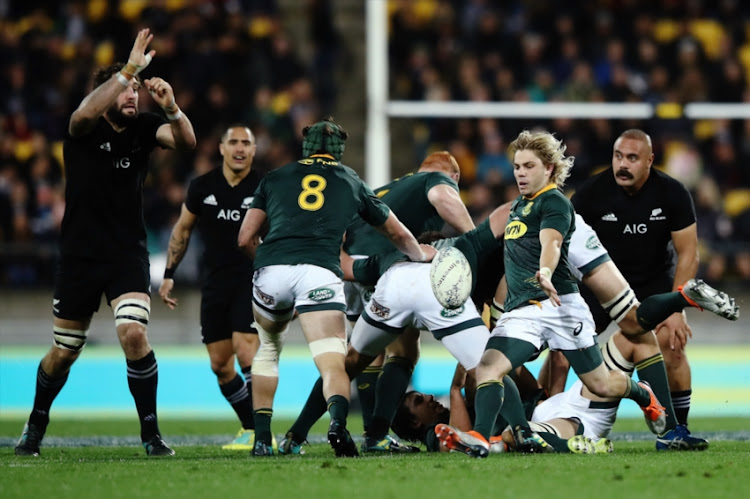 Far de Klerk of South Africa kicks the ball through during The Rugby Championship match between the New Zealand All Blacks and the South Africa Springboks at Westpac Stadium on September 15, 2018 in Wellington, New Zealand.
Image: Hannah Peters/Getty Images

Exactly one year from the start of Rugby World Cup 2019‚ Japan’s organisation is on track after early problems‚ which prompted a public rebuke from World Rugby in 2017.

The Springboks‚ who were in the doldrums at the time‚ also appear to be on track for the tournament a year from now following a historic and unexpected 36-34 win over the All Blacks in Wellington last week.

In 2017‚ around the time World Rugby were fretting about Japan’s readiness‚ specifically the construction of training venues‚ the Boks were reeling from a loss to Italy and suffering record defeats against the All Blacks and slipping to No.7 on the world rankings.

The Springboks are back up to No.5 and have a chance to improve their ranking in the coming months as they prepare for another assault on the World Cup in 12 months’ time.

The Boks are in Pool B where their opening game is against the reigning champions New Zealand in Yokohama. Last week’s win is a huge boost a year out from a clash where victory was‚ until a week ago‚ seen as a formality for the All Blacks.

World Rugby Chairman Bill Beaumont said he believed that Japan 2019 will be “a very special and game-changing Rugby World Cup” as the one year to go milestone was marked with a series of celebrations across the host nation.

On September 20‚ 2019‚ the world’s top 20 teams‚ supported by 1.8 million fans in-stadia and a global audience of hundreds of millions‚ will begin their quest to lift the most coveted trophy in rugby‚ the Webb Ellis Cup.

“World Rugby selected Japan as we believed in the tremendous opportunity to further the sport across Asia‚ and I am delighted to say that with a year to go we are confident that Japan 2019 will be a very special‚ successful and game-changing Rugby World Cup‚” Beaumont said.

“It will be the most impactful Rugby World Cup ever‚ attracting and retaining more than one million new rugby players in Asia.

“Japan 2019 will also benefit the whole of the nation from Sapporo in the north to Kumamoto in the south‚ delivering rugby and sports facilities for communities to enjoy‚ while pumping ¥216.6 billion (R2.8bn) added value into the economy.

“In keeping with a tournament that has rugby at heart‚ the team camp and match venue facilities are looking superb and everyone will receive an incredible welcome from engaged host cities and prefectures.”

So far‚ 19 of the 20 participating teams have been confirmed with Canada‚ Hong Kong‚ Germany and Kenya set to compete for the final available place via the repechage in Marseille in November 2018. The winners will join champions New Zealand‚ South Africa‚ Italy and Namibia in Pool B.

One year to go: Rugby World Cup 2019 by the numbers

2.5 million tickets applied for to date