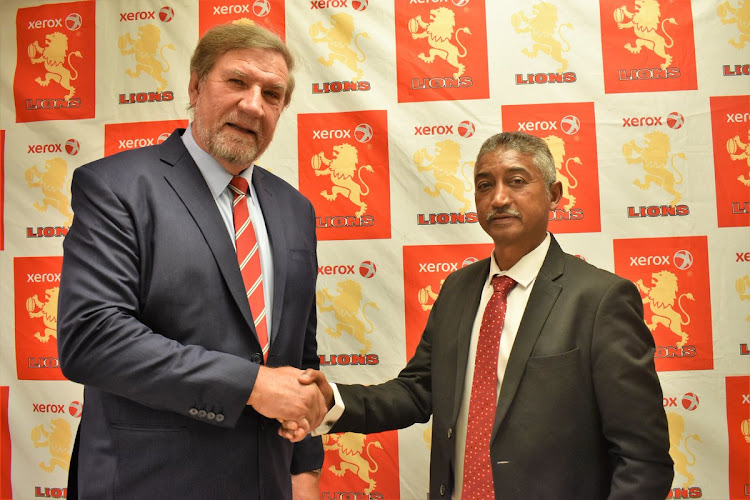 The Golden Lions Rugby Union is pleased to announce that Neville Jardine has been appointed as the newly elected president following the resignation of Kevin de Klerk recently.
Image: TWITTER/Xerox Golden Lions ‏

As much as it had a hint of inevitability about it‚ Neville Jardine still required patience and perseverance before he was installed as the Golden Lions Rugby Union’s new president.

Jardine‚ who since 2009 served in Kevin de Klerk’s considerable shadow‚ has quietly bided his time before he got the nod.

The latter also doubles as chairman of the board and main equity partner in the commercial arm of the Lions.

“I’ve known him for all these years‚” said Jardine about Allers.

“Through all the ups‚ and downs.

"We understand each other. I want to help grow the Lions. I’ve been part of the Lions for many years. It is very important that we have a good working relationship.”

While both men have strong club roots‚ serving sport is a pursuit that courses through the Jardine family’s veins.

His father Bill was a colossus in the non-racial sporting movement before integration in the early 1990s.

Unlike his predecessor‚ Jardine junior won’t be part of the furniture at the Lions.

“There are so many talented people around me‚” said Jardine.

“I always thought I could do the job.

"I’m a leader in my community‚ the small community around Raiders‚ and I’m part of the board that takes care of other sport as well.

“My passion was there and where I could contribute I always did. I did think I would eventually become president. I was deputy for long but I didn’t think it would come now.

“I never thought of giving up. I don’t walk away from a challenge.”

He admits the rugby landscape has changed quite significantly but that challenges remain.

“Ten years ago we didn’t have franchises‚" he said.

"We need to address the professional side and we need to fix the top structure.

"We need to bring more people into the game. I really want to grow the game.

"That is one of my passions especially in the previously disadvantaged areas.

“A lot of the established clubs are struggling‚ some are on the verge of dying.

"Money has almost dried up in club rugby.

"The numbers are down but not a helluva lot.

"We need to attract the right sponsors to club rugby to make sure our community plays again. It helps build a better and healthier society.”

Jardine stressed that he won’t be wholly focused on the amateur part of the game.

“It will always be a joint responsibility‚" he said.

"We are tied at the hip really. We are in it together.”