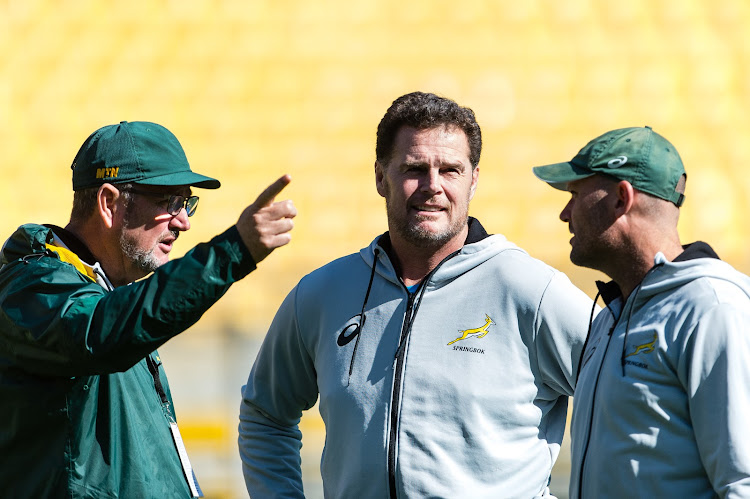 Erasmus has a 45% transformation target this season‚ which has to reach 50% in 2019. However‚ he will be assessed on his target over the entire season and not in individual matches.

In a statement Cosatu said it was‚ “speaking on behalf of many rugby players in South Africa who are enraged by the choices made by Rassie” for Saturday's Test.

“Rassie has been treating the black Springbok players as second-class this entire year. His starting line-up for Saturday is a reversal to white preference players‚ which exposes his attitude towards black players‚” the union continued.

“The white players are given special places in the Springbok team ahead of the form black players‚” Cosatu’s statement said.

“Mbonambi is substituted on 35 minutes‚ which is entirely irrational and designed to undermine him. Many black players when they do get a chance on the field are played out of their positions‚ to deny them the prospect to bring their best skills.”

The only player operating out of position this weekend is Jesse Kriel‚ normally a centre‚ who is on the wing in place of the injured Makazole Mapimpi.

Cosatu has a pattern of striking out at rugby at strategic times. In 2017‚ three days before the Boks played NZ in Cape Town‚ Cosatu threatened to protest at SA Rugby’s headquarters for selling its rights to pay-channel SuperSport.

In June‚ when Erasmus selected 37-year-old white hooker Schalk Brits on the bench for the third Test against England‚ Cosatu also commented on team selection.

At the time of Brits’s selection in June‚ Cosatu said the sport belonged to all South Africans.

“We cannot allow [Springbok coach] Rassie [Erasmus] to make irrational decisions to advance old white interest. We accept that he is the coach and must be allowed to follow his game plan‚ but clear irrational decisions‚ that benefit white players ahead of form black players‚ have to be examined‚” the union said then.

The union claimed a ‘Stellenbosch Mafia’ in cahoots with SA Rugby ran rugby.

“It is clear from the developments in the game that the cabal made up of SuperSport and SARU (the South African Rugby Union) are pushing old white interests. The Stellenbosch mafia are also involved in the manipulation of the sport‚” their statement read then.

Coach Rassie Erasmus has revealed that a decision on the appointment of a permanent Springbok captain will be announced in the months leading up to ...
Sport
3 years ago

Springboks coach Erasmus says the time for experimenting is over

Springboks coach Rassie Erasmus has confirmed that he will stop experimenting with the team at the end of the current Rugby Championship campaign.
Sport
3 years ago
Next Article