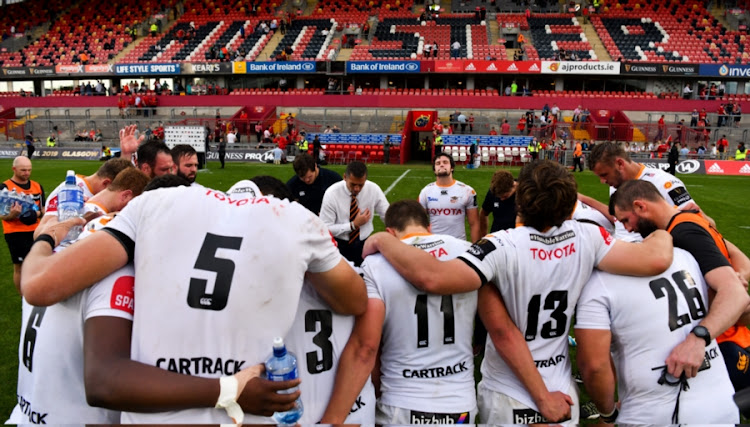 The Toyota Cheetahs director of rugby Franco Smith speaks to his players during the Guinness Pro14 match between Munster and Toyota Cheetahs at Thomond Park on September 01, 2018 in Munster, Ireland.
Image: Diarmuid Greene/Sportsfile/Gallo Images

The Cheetahs coach Franco Smith has acknowledged that his team will be up against it when they face the Ospreys in a Pro14 clash in Swansea on Saturday.

Smith’s player resources have been drastically depleted with defections over the last year and to make matters worse‚ they lost their captain Oupa Mohoje to long term injury in last weekend’s 38-0 humiliation against Munster in Limerick.

“We have a big challenge ahead of us‚” said Smith.

“The Ospreys team has a number of international players with a great pack of forwards and players like Alyn Wyn Jones‚ who is an excellent line-out jumper with lots of experience in the Wales and British and Irish Lions jersey‚ and forwards like Justin Tipuric‚ Brandley Davies‚ Dan Lydiate as well as George North and Scott Williams who’s names stand out in the backline.”

The Cheetahs are devoid of that star quality. The once capped loose head prop "Ox" Nché is the only Springbok on tour with the Cheetahs.

With measured expectations‚ Smith is in box-ticking mode as he seeks incremental improvement from his side.

“From our side we’d like to follow our processes and build on the positives from last week‚" he said.

"We were still in strike range up to the 65th minute against one of the best defensive teams in the Championship.

"We’ve asked ourselves a lot of good questions.

"We didn’t make use of all the opportunities and we want to improve on the set phases and defence.”

The conditions are unlikely to favour the Cheetahs.

Last season upon their entry in the competition the Cheetahs struggled to adapt to the conditions.

With a new crop of players this season‚ Smith’s charges will take a while to adapt.

“With the anticipation of relatively wet conditions‚ some areas of the game have been adapted to suit the weather circumstances‚” he said.

The Cheetahs‚ who will be captained by scrumhalf Shaun Venter in Mohoje’s absence‚ can take heart from the fact that they beat the Ospreys in Bloemfontein last season.

Springboks captain Siya Kolisi says he is not surprised by the unexpected changes that were made by Australia coach Michael Cheika ahead of their ...
Sport
3 years ago

Australia have suffered a massive blow on the eve of their Rugby Championship clash against SA on Saturday after influential No 8 David Pocock was ...
Sport
3 years ago
Next Article