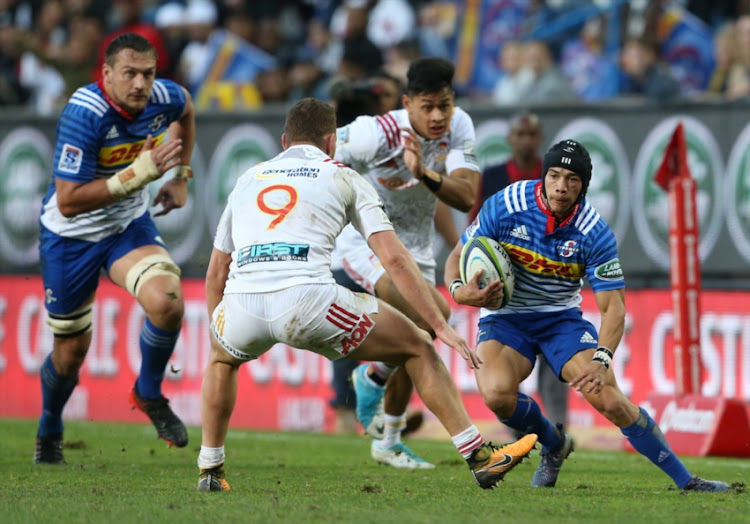 Cheslin Kolbe of the Stormers during the Super Rugby Quarter final between DHL Stormers and Chiefs at DHL Newlands on July 22, 2017 in Cape Town, South Africa.
Image: Carl Fourie/Gallo Images

Although Cheslin Kolbe was not part of the Springboks pre-season camps and only joined the squad in Brisbane on Monday‚ the diminutive utility back is set for a Test debut against Australia this weekend.

Kolbe‚ 24‚ who plays for Toulouse in the French Top 14‚ might be deployed on the wing for his Test debut as Bok coach Rassie Erasmus still looks for a solution in the absence of the injured Sbu Nkosi.

Makazole Mapimpi was injured two weeks ago while on tour‚ and might be benched this week.

The Boks have to bounce back from a 32-19 loss to Argentina in Mendoza when they face a Wallaby side also struggling for form after two heavy defeats against the All Blacks.

Assistant coach Matt Proudfoot faced the media in Brisbane and sang Kolbe’s praises‚ having worked with the nippy runner at the Stormers.

“We are excited to have Cheslin in the side‚” Proudfoot said.

"I think he deserves his chance in the group because he has really performed well [in France for Toulouse].

“I obviously know him well from my coaching days at the Stormers and he is the type of player who can really create something out of nothing.

“We felt we played really well in Durban [the Boks beat the Pumas 34-21] and let ourselves down in Argentina with our execution.

“We are looking for the same consistency and to play with the same level of physicality like in Durban.

“Our execution‚ whether at the breakdown or from set pieces‚ needs to improve across the board.”

The coach also warned of a Wallaby backlash after losing the Bledisloe Cup for a 15th straight year.

Wallaby coach Michael Cheika is under increasing pressure after overseeing only 14 wins in their last 34 Tests since the 2015 World Cup.

The Wallabies have also lost six of their last seven Tests‚ which included losing a home series 2-1 against Ireland in June.

“They will be determined to bounce back and will no doubt be in our faces‚ so we need to prepare with the same intensity that we can expect from them on Saturday‚” Proudfoot said.

“We are in fact two teams looking to bounce back‚ so this game is going to be crucial for both sides‚ to see how each one responds.

"It will be a tight game played on the advantage line by both sides who will be looking to get on the front foot.”

Star Wallaby fullback Israel Folau told local media that he had a “50/50” chance of being fit for the clash at the Suncorp Stadium after suffering an ankle injury against the All Blacks three weeks ago.

Folau’s presence would heap pressure on the Boks’ aerial and tactical kicking game as the Wallaby fullback is the best player in the world under the high ball.

“I guess I’ll know more as the week goes on.

“It’s been a tough couple of weeks in terms of the way we’ve been playing.

"It’s going to be another tough game on the weekend but we’ve had some really good games there in the past and that’s obviously going to help us going into this week.”

Last year both Rugby Championship Tests between the Wallabies and Boks – in Perth and Bloemfontein – ended in draws.