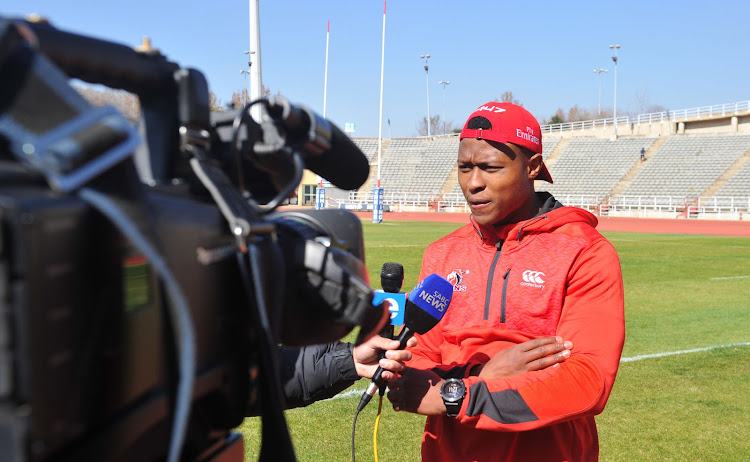 Aphiwe Dyantyi of the Emirates Lions speaks to reporters during a training session at Johannesburg Stadium on July 17 2018.
Image: Sydney Mahlangu/BackpagePix

Aphiwe Dyantyi will have to save his potentially explosive impact for the second half in Saturday’s Super Rugby final after he was named on the bench for the Lions.

They take on the defending champions the Crusaders in Christchurch with a team that shows two changes from the one that beat the Waratahs in the semi-finals.

Having sat out the second half last week with a hamstring injury‚ Dyantyi will this week make room for Courtnall Skosan in the starting line-up‚ while Cyle Brink returns to flank in the place of Lourens Erasmus who drops to the bench.

Brink has recovered from the shoulder injury that kept him out of action last week. Brink with his slightly lower centre of gravity than Erasmus‚ will be one of the Lions’ go-to ball carriers in what is expected to be a damp Christchurch on Saturday.

His confrontational defence should be equally valuable in stunting the home team’s momentum.

With him back on the side of the scrum the Lions pack has a familiar look to it.

That familiarity has been built over the last few years as captain Warren Whiteley reminded.

“The continuity we’ve built is unheard of in South Africa‚” said Whiteley.

“It is indicative of the culture we’ve established at the Lions. We love what we do.”

The backs too have a familiar look about it‚ especially with Skosan‚ who scored a late try last weekend‚ back in the No11 jersey. Dyantyi’s tiptoeing jet shoe act will be reserved for the second half‚ as will the chaos flank Marnus Schoeman inflicts on the opposing defence.

The Lions however‚ will have to do the bulk of their grunt early on if they want to keep the Crusaders in check. They will certainly need to start better than they have in recent weeks.

Against the Bulls‚ the Jaguares and the Waratahs they conceded two tries inside the first 20 minutes. That would be near suicidal against the Crusaders at sea level in Christchurch.

Lions’ talisman Elton Jantjies says the lessons‚ if not the pain‚ of two previous finals are the best preparation a team could hope for going into a ...
Sport
3 years ago

The line-out has been one of the Lions’ most potent weapons in Super Rugby and it stands to reason that they see aerial superiority as key to their ...
Sport
3 years ago
Next Article