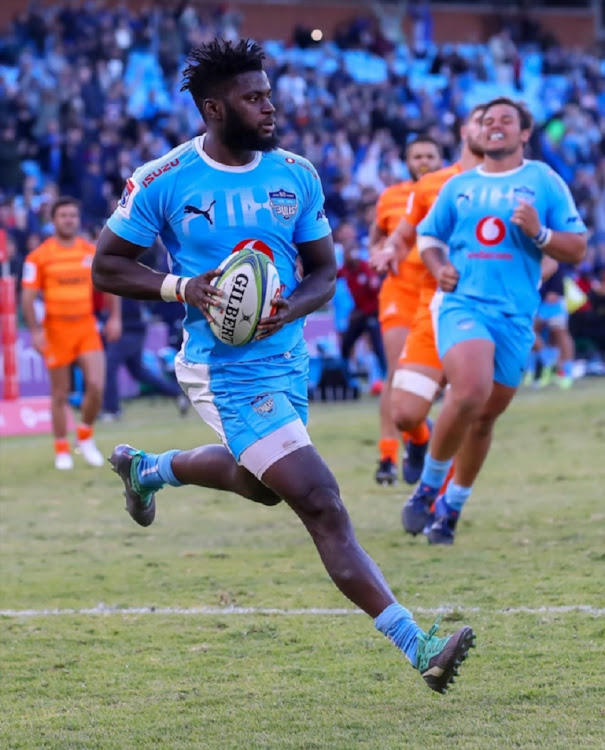 Try time for Jamba Ulengo of the Vodacom Bulls during the Super Rugby match between Vodacom Bulls and Jaguares at Loftus Versfeld on July 07, 2018 in Pretoria, South Africa.
Image: Gordon Arons/Gallo Images

Bulls and Springboks winger Jamba Ulengo is targeting the Currie Cup to re-establish himself after an injury-ravaged season.

Ulengo played his first Super Rugby match of the campaign when the Bulls beat the Jaguares 43-34 in the penultimate round of the season at Loftus last weekend.

He had been sidelined by a knee injury that needed surgery.

Ulengo marked his return to Super Rugby action with a brace of tries as the Bulls got the better of the Argentineans in a result that will serve as a morale booster ahead of their last match against the Lions at Ellis Park on Saturday.

Before he featured against the Jauares‚ Ulengo only played three matches for the Blue Bulls in the SuperSport Rugby Challenge‚ during which he did enough to prove his fitness to coach John Mitchell.

“It has been a long time since I played at this level but it felt good to be back on the field with the guys‚" he said.

"It has not been a Super Rugby campaign that we wanted but we are building for a great future ahead and I am sure that we will be a force to reckoned with going forward.

“For me right now‚ it is just to get confidence back and gladly there is still a lot of rugby to be played until the end of the year.

"I think Currie Cup is the place for me to get some game time and get confidence back‚” he said‚ dismissing talk of a return to the Springboks during the Rugby Championships later this year.

Bulls come from behind to beat the Jaguares

The Jaguares chose the worst possible time to have their seven-match winning streak when they succumbed to an inaccurate but desperate Bulls side.
Sport
3 years ago

To get to the bottom of the knee injury that was troubling him‚ Ulengo said he travelled to Sweden where he was seen by renowned specialist Professor Hakan Alfredson.

“Here in South Africa‚ they didn’t pick up that there was a vein growing in my knee under the patella. But the doctor in Sweden picked it up and fixed it once and for all. The man is a magician‚ I had surgery and here I am playing again.

"I don’t think that I have lost any speed‚ it is just a matter of time before I get back to my best.

"I am just a little bit rusty at the moment but I will improve with time‚” he said.

He admitted that it was “frustrating” sitting on the sidelines.

“But the support of my family and the coaches here at the Bulls helped me to pull through this journey. It was also mental because I was challenged with thoughts that I may never be able to achieve the goals that I set for myself.”