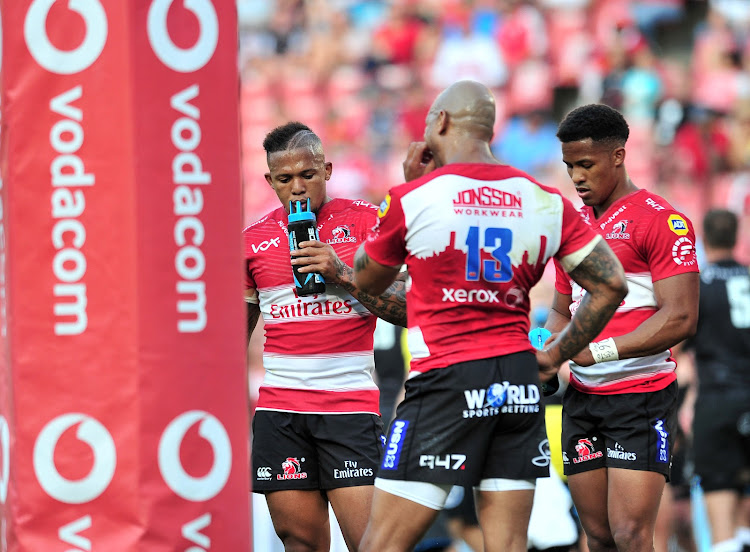 Elton Jantjies (L) and Lionel Mapoe's (C) future at the Emirates Lions in growing increasingly uncertain each passing day and the Johannesburg Union needs to move fast to tie them down on new improved contract.
Image: Samuel Shivambu/BackpagePix

Flyhalf Elton Jantjies and centre Lionel Mapoe’s future at the Lions may rest in the hands of SA Rugby’s director of rugby and Springbok coach Rassie Erasmus.

The two are part of a growing list of Lions players who are considering taking up contracts abroad‚ but as chief executive Rudolf Straeuli explained‚ nothing has been finalised yet.

“In the case of Elton and Lionel we are chatting to Rassie‚” said Straeuli.

“We have an indication but nothing has been firmed up yet.”

After a season that started with optimism and promise‚ the Stormers’ 2018 Super Rugby campaign has unravelled to become the worst in the franchise’s ...
Sport
3 years ago

Jantjies‚ whose proposed move to Ulster was blocked by the Irish Rugby Union in May‚ will be out of contract with the Lions at the end of the season.

Straeuli explained that unlike last season‚ the pair don’t have agreements in Japan and their shortfall in income has to be supplemented.

“We made them offers but I can’t match what they would have earned in Japan‚" he said.

"The period in question is during the Currie Cup and I can’t pay them if they are going to be with the Springboks.

Former Springbok coach Peter de Villiers has seen some strange things in rugby‚ but the sight of his team sleeping on the streets of a foreign city ...
Sport
3 years ago

"We are looking at seven Currie Cup games and I can’t afford it.

“I’m quite happy for the guys to go play in Japan because they’ll come back and play Super Rugby.

"Now‚ however‚ the clubs in Japan are more interested in uncapped players.”

Straeuli has had to juggle his resources as the franchise’s players are increasingly in demand abroad.

They also look set to lose another prop Jacques van Rooyen‚ while fullback Andries Coetzee may also be nudging towards the exit.

Late chance for JD Schickerling to catch the eye

Lock JD Schickerling will have a last chance to catch the eye of Springbok coach Rassie Erasmus this weekend after being declared fit for the ...
Sport
3 years ago

Springbok lock Franco Mostert has also apparently reached an agreement with Gloucester but the Lions are in dispute with the English club.

Straeuli confirmed that they are still in dispute.

“Some of the guys have signed (with the Lions) and others are moving.

"It hasn’t been finalised but Jacques will probably move on. In the case of Andries nothing has been signed off yet. There’s no clarity.”

The next fortnight will be crunch time for the Lions. In the first two weeks of July players and clubs have to reach agreements.

“Officially we are in that period so everything needs to be settled in the next week or two. At the end of it I will be able to come out with a complete list of who’s coming and going.”

With fewer Lions players called up for international duty this season the franchise was always going to have their work cut out to retain their resources.

Captain Warren Whiteley and hooker Malcolm Marx will stay‚ with their contracts being topped up by agreements with SA Rugby.

Meanwhile‚ the Lions will be thankful they have a bye this weekend. Prop Dylan Smith has a grade 1 calf strain‚ wing Sylvian Mahuza has a grade one adductor strain (hip)‚ lock Marvin Orie is concussed‚ Jantjies has a rib injury‚ while flank Len Massyn has a grade two ankle injury.

Massyn is the only one already ruled out of next week’s clash against the Bulls.