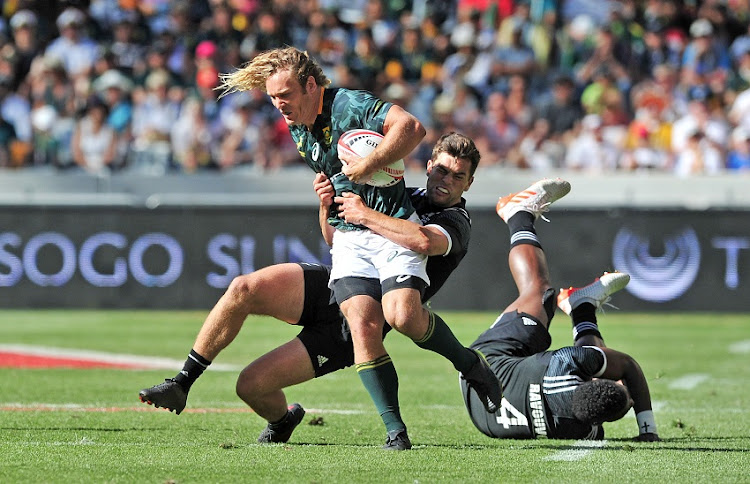 Werner Kok of South Africa is tackled by Andrew Knewstubb of New Zealand during day 2 of the 2017 HSBC Cape Town Sevens at Cape Town Stadium on 10 December 2017.
Image: Ryan Wilkisky/BackpagePix

The Blitzbokke exhibited excellent consistency to remain in contention in the 2017/2018 World Rugby Sevens World Series‚ which they ultimately defended by pipping Fiji to the post by two points.

While the Blitzbokke won only two finals in Dubai and Paris‚ they made the semi-finals in every tournament and that allowed them to keep the other teams in check.

However‚ with the Sevens World Cup in San Francisco being a straight knock-out‚ a lapse in concentration could be fatal.

This is something Kok and his prospective teammates would love to avoid.

“With the double World Series win‚ there's always a target on your back but going into this World Cup that's taking place in the last bit of the season‚ it's going to be a bigger mental fight than a physical one‚" Kok said.

"All the bodies are sore and it's going to be the team that wants it the most that's going to take it.

“The World Cup is a bit different because it's a straight knock-out tournament and you only play four games to get to the final.

"There's no second chances like we had in the world series where we lost some pool games. We have to fight it out and be the best team on the field.”

Kok missed out on selection for the 2014 edition that took place in Russia and will want to make up for lost time.

With the Blitzbokke missing out on Olympic gold and Commonwealth Games silverware‚ there's extra reason for the Sevens team to hit the ground running.

The Sevens World Cup has also fallen in the pecking order behind the Olympics and the Commonwealth Games but this could be Kok's only chance to win this trophy.

“With the Sevens Series being so competitive‚ the Sevens World Cup is a big thing and I didn't go to the previous World Cup‚" Kok said.

"I was part of the team but I didn't make the final squad. I would love to be a World Cup winner. It's a big tournament to be part of and to come back with the World Cup would be amazing.

“It's not a score for me to settle‚ it's just another great opportunity for me to get onto the field and if I get picked for the team‚ I hope I can make a difference.”