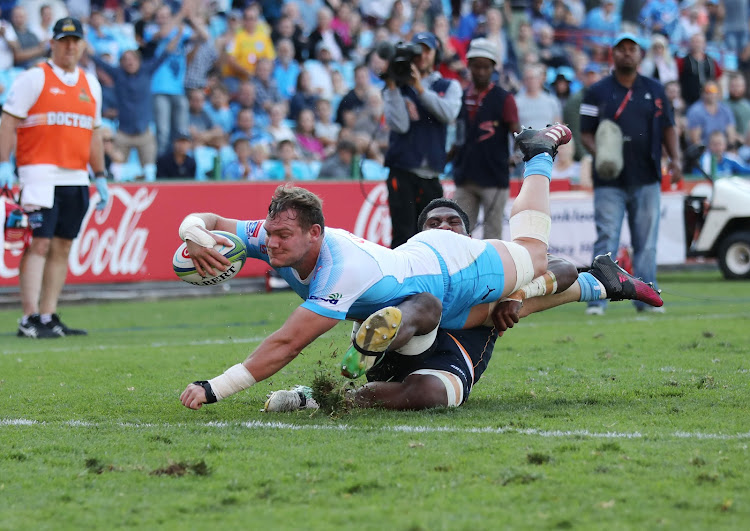 Roelof Smit of the Vodacom Bulls breaks through Brumbies defence to score a try during the Super Rugby match against the Brumbies at Loftus Stadium, Pretoria on May 26 2018.
Image: Gavin Barker/BackpagePix

The Bulls made a mess of what looked like a negotiable job and their Super Rugby play-offs hopes are now in complete tatters.

Playing at home, they were largely expected to prevail against this modest Brumbies side that came into this clash on the back of five consecutive losses but they made a complete cock up as a result of a poor performance.

To add salt to injury for the Bulls, two late tries for the Brumbies by Tom Banks and Andy Speight that settled this uninspiring match and ensured the much needed victory, were scored with the Australians a man down following the red card to Folau Faingaa.

As a result of this victory, Bulls who travel to Hong Kong to meet the Sunwolves, welcome the high flying Jagures and travel to the Lions in their remaining matches after the Junes Tests, have an outside chance of making it to the play-offs.

This is the second loss on the trot for them following last week’s defeat by the Jaguares in Buenos Aires and coach John Mitchell will have to find a formula soon to motivate his players for the remainder of the round robin.

The Bulls were the first to get the scoreboard ticking through a try by pivot Handrè Pollard who was released by a clever Johnny Kotze offload inside the opening five minutes and he found the middle of the poles from the resultant conversion.

Pollard’s conversion was his 50th point in the competition as he continued to make a strong statement to Springboks coach Rassie Erasmus for a starting place during the June Tests against England in Johannesburg, Bloemfontein and Cape Town.

Bulls’ lead was short-lived as their defence was caught in slumber land from the restart by alert Kyle Godwin who touched down next to the far side flag and Christian Lealiiffano leveled the score with the conversion.

The Bulls were under pressure and they committed silly mistakes with Conraad van Vuuren penalised by referee Marius van der Westhuizen with a penalty that was put away by Lealiiffano for interfering with the Brumbies scrum-half.

The home side responded shortly afterwards with their second converted try of the match by Roelof Smit who benefited from clever interchanging play between Kotze and skipper Burger Odendaal as they retook the lead.

On the stoke of half time, Lealiiffano missed a golden opportunity of bringing the Brumbies to within one point of the Bulls as he missed a penalty.

The Brumbies assumed the lead three minutes after restart through a try by Lechlan McCaffrey that was followed by a conversion by Lealiiffano but Bulls leveled matters shortly through a penalty by Pollard.

Bulls pulled away once again when Kotze touched down next to the near side flag but Pollard missed the mark for the first time on the afternoon.

Pollard recovered his scoring touch a few minutes later when he converted a penalty but Brumbies scored their third try through Folau Faingaa with Lealiiffano converting to come within a point of the Bulls.

After the red card to Faingaa for unsporting behavior, Pollard scored a penalty but the Brumbies replied with two converted tries by Banks and Speight to leave the Bulls play-offs hopes in complete tatters.

After a frustrating Super Rugby campaign that has seen Seabelo Senatla become something unimaginable – ordinary – the crown prince of sevens is set ...
Sport
4 years ago

The Stormers may know him intimately but that goes both ways‚ argues Lions scrumhalf Nic Groom ahead of the teams’ Super Rugby clash on Saturday at ...
Sport
4 years ago

The saga of SuperSport rugby pundit Ashwin Willemse’s walkout of a live broadcast last weekend took a new twist when he and co-presenters Nick ...
News
4 years ago

How does Andries Coetzee rate his season?

Willie le Roux has provided quite a sting in the tail at Wasps‚ while Warrick Gelant has mesmerised with his galloping runs at the Bulls.
Sport
4 years ago
Next Article