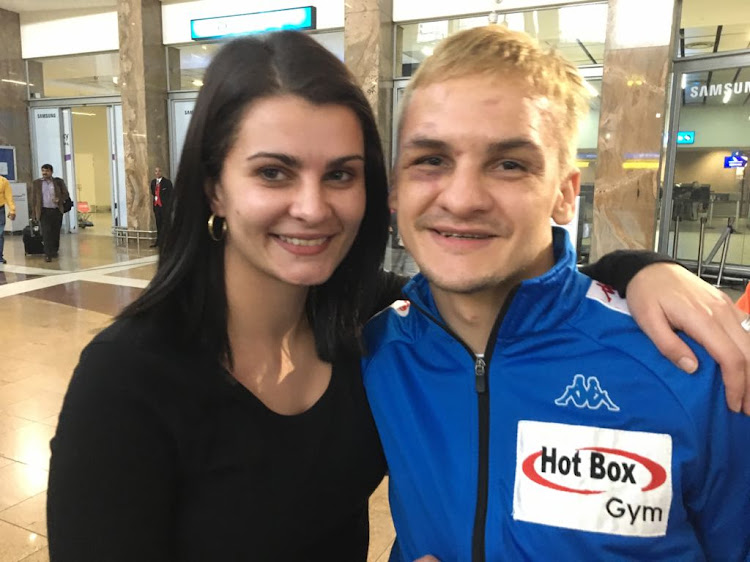 SA champion boxer Hekkie Budler pose for a photo with his wife shortly after arriving at OR Tambo International Airport from Japan on Tuesday May 22 2018.
Image: David Isaacson

A band played in the arrivals hall at OR Tambo on Tuesday evening as Hekkie Budler returned home after his historic victory in Japan on Sunday.

His face carried the bruises of his battle with Ryoichi Taguchi for the WBA‚ IBF and Ring magazine junior-flyweight titles‚ as well as the smile of a champion.

That makes him South Africa’s most prolific champion of all time with six different belts‚ not that he realised it.

“Am I?” he replied when asked how he felt about his achievement.

The band is loudly awaiting the arrival of victorious world champ @BudlerHekkie at OR Tambo pic.twitter.com/mcuu3dUogC

Budler left the country a little over a week ago as a 29-year-old hungry to become a world champ again and literally starving for a decent meal as he was watching his weight to make the 48.99kg limit.

He returned home a year older‚ having turned 30 last Friday‚ and waiting for him at home‚ according to wife Roxy‚ were 30 birthday presents‚ all wrapped.

“I’ve numbered all of them‚” she said‚ adding they would also get something to eat.

On the same flight back was judge Neville Hotz‚ one of the three ringside officials who scored the bout in Budler’s favour with identical scores of 114-113.

The margin would have been 115-113‚ but the scores were changed after officials decided that Budler had been knocked down in the final round and had not slipped‚ as initially ruled by the referee.

“He caught me with a good shot‚” Budler admitted‚ saying he was caught off-balance.

“I wasn’t hurt. I actually thought it was a slip at the time.”

Hotz said the fight had been difficult to score‚ but Budler was the deserving victor.

“The first five rounds we all gave to Hekkie. After that [we differed] with one or two rounds here and there.”

Family‚ friends and officials from Boxing SA‚ which organised the band‚ came to greet the diminutive fighter.

Budler will have to wait a while for his new belts to be sent to him by the sanctioning bodies‚ but he did return home with two massive trophies‚ both nearly as tall as he is.

What were they for?

“I don’t know!” he replied with a smile‚ eager to leave the airport and get back to their Newlands home in west Johannesburg.