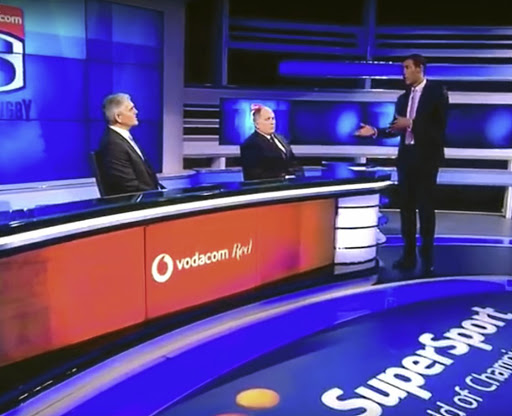 SuperSport rugby analyst Ashwin Willemse’s walk out of a live broadcast last Saturday was not ‘racially motivated’ according to company CEO Gideon Khobane.

He made the statement after emerging from a meeting between Willemse and colleagues Nick Mallett and Naas Botha‚ who were the subject of the former’s anger on Saturday.

Willemse‚ a former Springbok wing who played 19 Tests and was a member of the 2007 World Cup winning squad‚ claimed he “can't work with people who undermine other people".

In a stunning monologue following a commercial break after the Lions versus Brumbies Super Rugby match‚ Willemse let fly at co-presenters Mallett and Botha.

Sports and Recreation Minister Toko Xasa on Sunday called on SuperSport to suspend Nick Mallett and Naas Botha while it is investigating an incident ...
Sport
4 years ago

Willemse’s comments hinted at racial bias but that was denied on Monday.

“We are positive that this was not a racially motivated issue because all parties were very courteous during our discussions that started this morning‚” Khobane said.

“But we are in a process of discussing it further because this is now a national issue.

“We still have more time to investigate deeper on what actually happened because nobody just leaves a live production.

“We will continue our discussions tomorrow but I wanted to update everyone that Naas‚ Ashwin and Nick are all in good communication with each other.”

Calvo Mawela‚ CEO: Multichoice SA‚ the parent company of SuperSport added: “We are at a stage where we are still gathering information‚ however we will not reach any conclusions today.

“We have all agreed‚ together with the three parties‚ that we will continue to engage. As to when this we will be concluded‚ we cannot say right now.”

In what was an unexpected and shocking twist of drama at the SuperSport studios in Randburg, former Springbok wing Ashwin Willemse walked out of the ...
Sport
4 years ago

Mallett was the first to leave but Khobane defused any suggestions that the former Bok No 8 and coach had staged a walkout.

“Nick Mallet didn’t walk out of the meeting today‚ he lives in Cape Town and only got a flight here this morning and had to leave early to catch a flight back to Cape Town‚” Khobane said.

The CEOs also noted concern expressed by the Sports Ministry in the wake of the incident after the Minister of Sports and Recreation Thokozile Xasa made a statement of support for Willemse.

It was issued on Sunday before the company had a chance to investigate the incident.

“We are in communication with the Department of Sport and we have a healthy relationship with them‚” Khobane said.

SA Rugby weighed in on the issue with a short statement: “We were as surprised and concerned as the rest of the rugby community by Saturday evening’s incident on SuperSport.

“It would not be fair to make snap judgements. However‚ something was clearly amiss and it reflected poorly on rugby. This is a SuperSport matter and we have asked to be kept informed on the process of the investigation.”

A TV spat that shocked SA

If Ashwin Willemse was branded a "quota player" by fellow SuperSport presenters "it is sad, especially in this day and age".
Sport
4 years ago
Next Article