Lions far from convincing in win against Brumbies 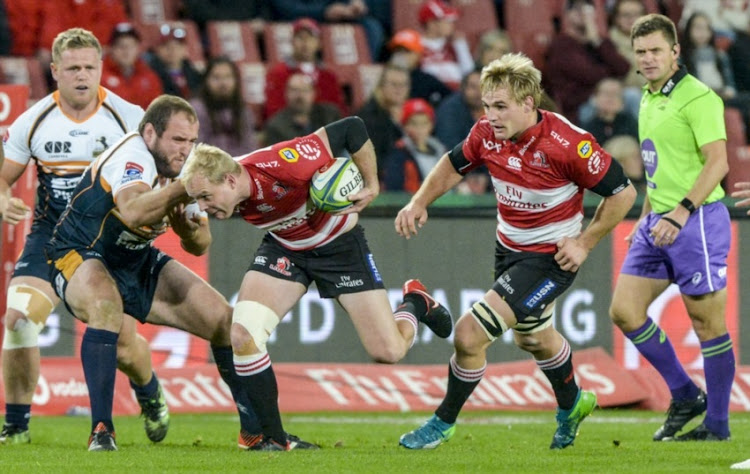 Ross Cronje of the Lions tackled during the Super Rugby match between Emirates Lions and Brumbies at Emirates Airline Park on May 19, 2018 in Johannesburg, South Africa.
Image: Sydney Seshibedi/Gallo Images

In the end they won by a handsome margin‚ but the Lions failed to convince against the team one place from the bottom of the Super Rugby points table at Ellis Park on Saturday.

On the occasion of Elton Jantjies’ 100th Super Rugby game‚ unlike elsewhere‚ there was little pomp or ceremony.

By no means was their 42-24 win against the Brumbies a carriage ride in the park and they only got to touch the icing after some of their guests departed the scene.

The result‚ at the very least‚ would have been less decisive in favour of the hosts had visiting locks Rory Arnold and Sam Carter not been red and yellow carded respectively‚ just after the hour mark.

The Lions at that stage were trailing by three points and although they were building momentum‚ weren’t making any further advances on the scoreboard.

Captain Franco Mostert was honest enough to suggest: “I wouldn’t say we are back on course but the win gave us a bit of a boost. There is a lot of stuff that we still need to go and work on.”

Following three successive defeats in Australasia there was the need for the Lions to deliver a performance of fist thumping authority back on home soil.

Against one of the more organised defences they initially met stubborn resistance.

“There were a lot of errors but we knew it would be an arm wrestle from the get-go. They are in your face. We knew if our discipline was better than theirs we’d come through‚" Mostert said.

The Brumbies delivered on that prophecy in the shape of Arnold‚ a 2.08m behemoth who hit Jantjies high‚ while Carter cynically collapsed the maul.

“I was a bit grumpy but its’ all good‚” said Jantjies of Arnold’s high hit.

“We did pick up on the ref’s mic that they were under warning coming offside at the maul and we had to capitalise‚” explained De Bruin.

Ultimately the Lions mauled the Brumbies into submission and although they maintained a seven-point gap in their conference they don’t look like a team equipped with the sustained intensity to challenge the front runners in New Zealand.

For the moment‚ that doesn’t bother De Bruin.

“We just focus on our job. We try and not look too much across the border at other conferences.”

Jantjies looked beyond the early errors and underlined what drives the Lions.

“One of our goals is to score a lot of tries. We did and that is a positive for me.”