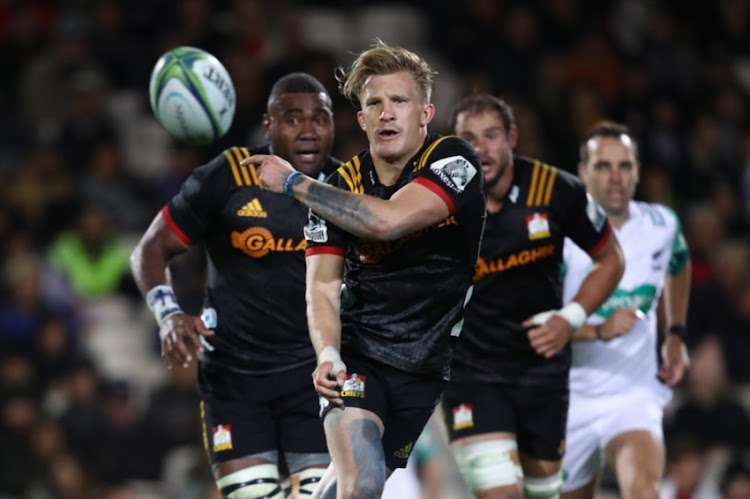 Damian McKenzie of the Chiefs passes during the round 12 Super Rugby match between the Chiefs and the Jaguares at Rotorua International Stadium on May 4, 2018 in Rotorua, New Zealand.
Image: Phil Walter/Getty Images

After back-to-back wins‚ the Stormers won’t be showing any signs of complacency when they take on the Chiefs at Newlands this weekend.

The Stormers played six away matches in their first nine outings of the season‚ losing all the games on the road.

But at home they have a 100% record with five from five wins‚ including the scalps of the Bulls‚ Blues and Jaguares.

Newlands is like a 16th man for the Stormers but there is no chance they will take the situation for granted against the pedigreed New Zealand visitors.

“There is no danger of complacency going into this week‚” said skills coach Paul Feeney.

“Every game for us now is a last 16 game (meaning a knockout) and it’s always great playing against New Zealand teams – especially at Newlands.

“At Newlands we’re proud of our results‚ we have won our last two games here and the fans have come out – so that really gets us up especially in tough times. But we still have to produce.

“The Chiefs are in for this game boots and all. It’s been well documented that the All Blacks are all going back home after this game‚ so this is the big one of their tour.

“I saw that [Chiefs coach] Colin Cooper said that he rested Brodie Retallick last week to make sure he would be firing on all cylinders at Newlands.

"That pretty much sums up the Chiefs’ attitude for this game.”

Feeney admitted that because of the 15-team format there were fewer ‘easy’ games this season‚ demanding more focus and precision from all teams to stay alive in the tournament.

“I can sense there is more of an edge in training‚” Feeney said.

“We still want to make the quarterfinals and we don’t think the chase to win the SA conference is over yet either.

“We’ll see how the Lions go against the Highlanders in Dunedin this week if they get knocked over they 6-6.

"They wouldn’t have lost six games in the last two years. The Highlanders are unbeaten at home and if the Lions win there they will be doing well.

“The Sharks have just beaten the Highlanders‚ The Jaguares are the surprise package and the Bulls have been going well too.

"It’s a competitive and tight conference‚ which is great for the fans‚ for rugby and for the tournament‚ but not so great for the coaches.

“We also have home matches against the Lions and Sharks in our future and an away game against the Jaguares. So if we keep winning anything is possible. Our future is still in our hands.

“The Bulls are playing better‚ so they are more competitive. Last year the Cheetahs and Kings weren’t consistent so there were opportunities.

“But this year we play the Lions and Sharks twice and will all due respect to those other teams‚ it’s a bit tougher. Every week it’s more intense and the games are balancing on small things.”

Feeney believes that the SA teams in the competition are showing more skills and game awareness than in the past‚ which is contributing to the narrowing of the gap to the top NZ teams.

“There has also been a definite improvement in terms of the way teams and players are performing‚” Feeney said.

“SA players are showing a willingness to use the ball and are showing better conditioning to do it.

“On the road SA teams are still inconsistent but it will come. The gap is closing. It will come with confidence and maturity in each team’s set-up.

“We’ve changed a lot here this year with how much input the players and the leadership have.

"We’ve changed systems and at the beginning of the year we were a bit slow in grasping those changes‚ but I now see the benefits at the back end of the season.”