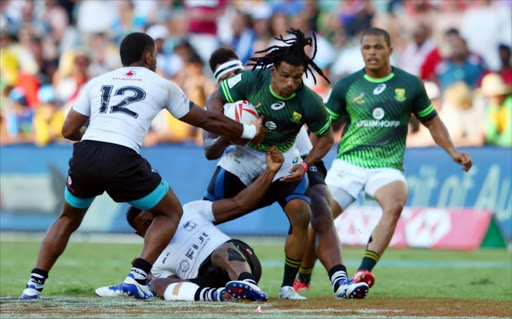 Rosko Specman of South Africa in action during the 2016 Sydney Sevens match between South Africa and Fiji at Allianz Stadium on February 7, 2016 in Sydney, Australia.
Image: Renee McKay/Getty Images

The Blitzboks will go into the vital last two tournaments of the World Sevens Series without the experienced Kyle Brown and hard man Tim Agaba.

Agaba’s season was also cut short due to a bicep injury. The Blitzboks are currently second on the HSBC World Rugby Sevens Series log after eight tournaments.

They trail Fiji by three points and will have all to play for as they aim to defend their series title.

Neil Powell’s side made the top four in all eight tournaments thus far this season‚ pointing to their consistent performances since the opening tournament in Dubai in December last year.

South Africa will contest Pool D at the London Sevens‚ along with Samoa‚ Canada and Russia and if they make it into the Cup quarter-finals‚ they could meet either Fiji‚ New Zealand‚ Scotland or Argentina‚ all drawn in a highly competitive Pool A.

Australia‚ Wales‚ Spain and Ireland will play in Pool B‚ with the latter being invited as 16th team.

The hosts‚ England‚ will face Kenya‚ USA and France in another competitive pool. Branco du Preez‚ who had an ankle strain‚ and Ruhan Nel‚ Justin Geduld and Philip Snyman‚ who were rested for the Singapore event‚ will all be integrated back into training next week.

Speedsters Rosko Specman (shoulder) and Selvyn Davids (hamstring) are currently recovering injuries and are in a race against time to be considered for the final two events.

There was a bit of good news on the injury front though with Chris Dry‚ who underwent knee surgery in December‚ recovering well as he aims to be ready for the Rugby World Cup Sevens in San Francisco from 20-22 July.