Bulls narrowly go down to the Highlanders at Loftus 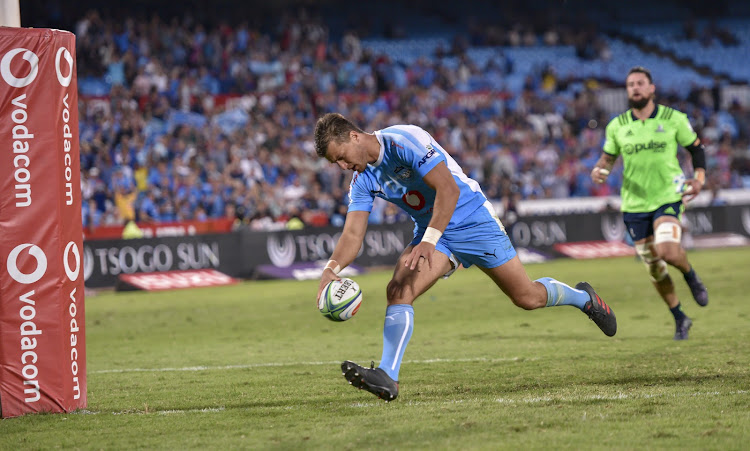 Handre Pollard of the Vodacom Bulls scores a try during a Super Rugby game against the Highlanders at Loftus Versfeld Stadium, Pretoria on Saturday April 28 2018.
Image: Christiaan Kotze/Backpagepix

A reality check in the form of a glow-in-the-dark shirted Highlanders unit arrived in Sunnyside and reminded the Bulls of the improvement path they still need to tread before they can be considered championship material.

The Bulls were their own worst enemies, especially from a disciplinary perspective and an accurate sharp-shooter like Lima Sopoaga punished them accordingly.

The back-up All Black pivot collected 19 points and landed an 82nd minute penalty to deny the Bulls a fourth consecutive win.

John Mitchell's side had plenty of chances to extend their leads at various points in the game but they were punished for not taking their opportunities.

The Bulls should have had a bigger half-time lead if Jesse Kriel decided to go for the line instead of shovelling a poor pass to Warrick Gelant two minutes past the half-time hooter.

In what was a first half of distinctly different quarters, the Highlanders took the opportunity that came their way but the Bulls roared back in the second quarter.

The Highlanders fullback Fletcher Smith was at the heart of the Bulls and Highlanders tries. His deft chip put All Black scrumhalf Aaron Smith into space for a good fourth-minute touchdown.

Fletcher Smith then found himself on the wrong side of the law 18 minutes later when he held Gelant back after Kriel's grubber caught the Highlanders defence flatfooted.

Referee Glen Jackson had no option but to yellow-card the fullback and award the Bulls a penalty try.

What the Bulls quickly learnt was that the Highlanders were a far smarter and resourceful opposition as compared to the Rebels.

The Bulls didn't try to out-gun the visitors but the Highlanders also had the brawn to match the Bulls' physicality.

A facet of the Bulls' game that's improved without much fanfare; their defence, created their second try on the half-hour mark

Smothering the Highlanders, Teihorangi Walden's pass was smartly intercepted by Handre Pollard, who sprinted 40 metres to the whitewash.

However, the Bulls paid dearly for Kriel's error as Sopoaga's 43rd minute penalty narrowed the gap to one point before the Smiths (Ben, Aaron and Fletcher) combined for a wonderful coast-to-coast try straight from the restart.

With the Bulls going off the boil, Sopoaga extended the Highlanders' lead to nine points before Jason Jenkins's 57th minute try narrowed the deficit to two points.

The Bulls somehow conspired to gift Sopoaga a fourth penalty five minutes later and had to spend the rest of the last quarter searching for the equalising try.

It eventually came from Kriel in the 75th minute but the Bulls' lack of discipline reared it's unfortunate head. When Jackson pinged them for an offside penalty just before the full-time hooter, Sopoaga dished out his worst kick from 44 metres, but it was enough to creep over the bar.

After eye-catching performances off the bench this season‚ prop Lizo Gqoboka has been handed his first Super Rugby start by Bulls coach John Mitchell ...
Sport
4 years ago

The Stormers ended a three-match Super Rugby losing streak to keep their faint play-off hopes alive by beating the Melbourne Rebels 34-18 at Newlands ...
Sport
4 years ago

The Springbok Test match against Wales in Washington DC will go ahead as scheduled despite a report out of Britain suggesting the fixture is in ...
Sport
4 years ago

Lions have another intangible beast to fight in Brisbane

The Lions last week niftily avoided jet lag which proved crucial in their win over the Waratahs‚ but they’ll need to fight another intangible beast ...
Sport
4 years ago
Next Article