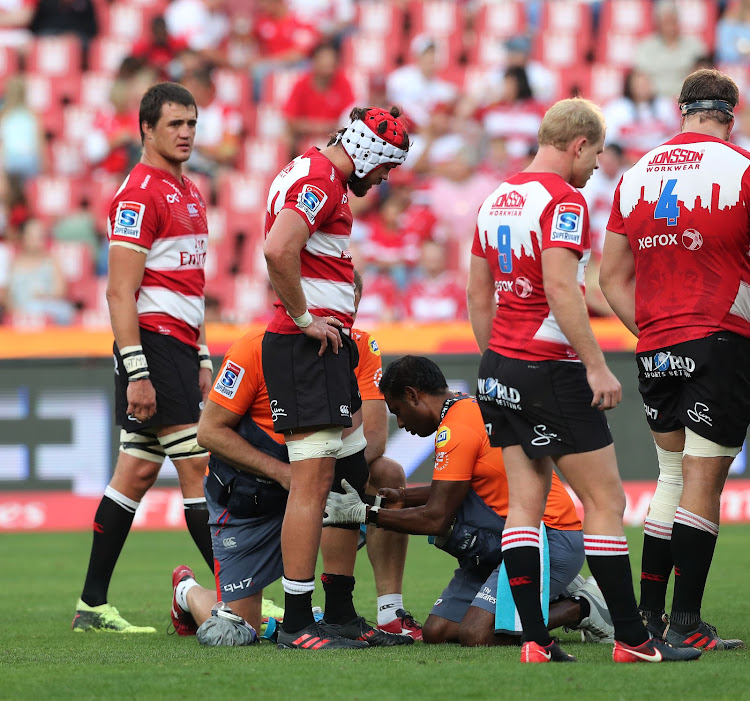 The Emirates Lions captain Warren Whiteley gets medical attention on the field after sustaining an injury to his knee during the Super Rugby match against the Blues at Ellis Park, Johannesburg on 10 March 2018.
Image: Gavin Barker/BackpagePix

Lions captain Warren Whiteley’s return from injury is back on ice after he felt a ‘click’ in his troublesome knee.

Last year’s Bok captain who had been named in the Lions’ squad for their tour to Australasia‚ injured the same knee that suffered cruciate ligament damage against the Blues at the start of last month.

“The knee swelled up overnight and he doesn’t feel comfortable with it‚” said the Lions’ team doctor Rob Collins.

“As a pre caution we will send him for a scan and he’ll see an orthopedic surgeon today (Tuesday).

"Depending what it shows‚ and I don’t think it is anything to be too worried about‚ he will join us a bit later. That depends what the scan shows.

“When we examined him we couldn’t find anything in the knee that we are worried about. We don’t want to rush it. It is unlikely to be something that will keep him out for an extended period of time.”

If the injury is not serious Whiteley will travel across the Indian Ocean at a later stage.

“The plan was that he would fly with us but now we just have to adapt‚” said coach Swys de Bruin.

“We are in the kind of game where these things happen. It is a blow. He is Captain Fantastic.

"The reality is we’ve got faith in the guys slotting in. We are backing our squad system.”

With Whiteley still out Hacjivah Dayimani will keep possession of the No8 jersey for Friday’s clash against the Waratahs.

“Hacjivah showed in the last few games he’s up to it‚ for whatever the fight is‚” said De Bruin.

Springbok scrumhalf Ross Cronje who has been convalescing with rib and knee injuries lost his race to regain fitness ahead of the tour and his place has gone to former Stormer‚ Nic Groom who joined the Lions from Northampton earlier this month.

The only other regular scrumhalf in the touring group is Dillon Smit‚ but fullback Andries Coetzee has also played in that position with distinction. Smit will start against the Waratahs.

Wing Aphiwe Dyantyi who has a pectoral muscle injury failed his fitness test and wasn’t named in the touring squad‚ but Rohan Janse van Rensburg and Cyle Brink are over their recent knocks.

De Bruin knows the Lions will have their work cut out to deliver another unblemished record on tour. Last year they won all three matches in Australia and were spared a trip across the Tasman to New Zealand.

“We take it week by week. We love touring. We will do what we did last year. Last year we had what you can perhaps call an easy tour.

"We played three games in Australia of which one was in Perth which is not far off. This time it is a lot more challenging. There is an extra two hours when you go from Australia to New Zealand.

“We could have gone last Friday or on Saturday but we figured if we go as late as possible for a Friday night game we can stay in our time zone as far as possible. After that we’ll have to adapt for the Reds game.”

The Lions start their tour on Friday with a clash against the Waratahs in Sydney‚ before going on to play the Reds in Brisbane‚ the Hurricanes in Wellington‚ before concluding their tour against the Highlanders in Dunedin.

The spirit of cooperation between the Springboks and the Super Rugby franchises firmed further on Friday with the news that Lions coach Swys de Bruin ...
Sport
4 years ago

New Zealand teams have dominated Super Rugby since its inception‚ but never as much as they have in the past three years.
Sport
4 years ago

A week is a long time in rugby but according to veteran Springboks and Sharks prop Tendai “Beast” Mtawarira‚ that length of time after an ...
Sport
4 years ago
Next Article