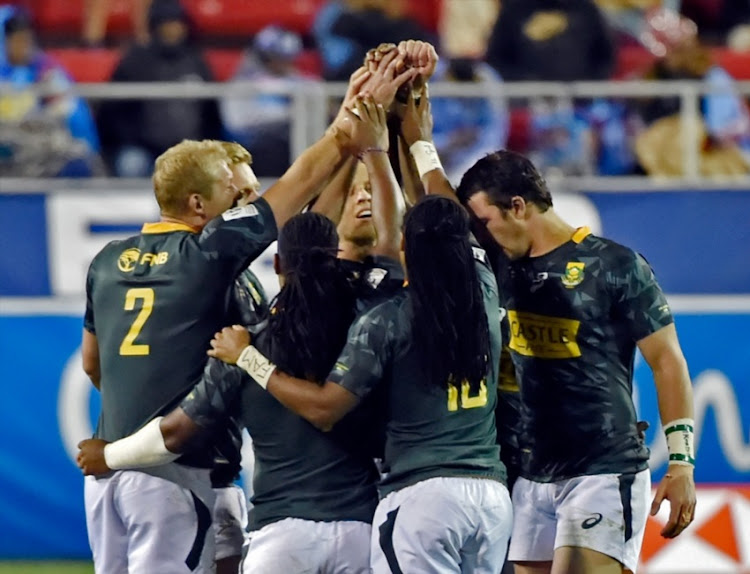 South Africa huddles up before their match against Australia during day 2 of the 2018 HSBC USA Sevens at Sam Boyd Stadium on March 03, 2018 in Las Vegas, United States of America.
Image: David Becker/Gallo Images

The Blitzboks still hold a tenuous eight-point lead at the top of the 2017-18 HSBC World Sevens Series standings and if they can emerge from this weekend’s leg in Hong Kong still leading‚ it would be mission accomplished.

The most inexperienced SA team since the early years of the World Series will look to preserve their advantage over Fiji‚ after nine ‘first choice’ players were overlooked due to Gold Coast Commonwealth Games commitments next week.

They face England‚ Scotland and Korea in Pool C. Aside from Korea‚ the Blitzboks would need to beat one of the two British teams to reach the last eight.

Hong Kong is the crown jewel of the regular season‚ and it’s the one tournament on circuit that SA have yet to win.

But as much as coach Neil Powell and his players want a Hong Kong victory‚ putting on a successful Commonwealth Games defence took priority this year.

There are five World Series debutants for Hong Kong while academy coach Marius Schoeman will lead the team with Powell in charge of the Commonwealth Games squad.

Nine regulars are currently in Stellenbosch preparing for the Rugby Sevens at the Commonwealth Games‚ which has created opportunities for academy players to impress.

Playmaker and flyhalf Selvyn Davids said the focus should be on the squad in Hong Kong.

“I made my debut here last year. Unfortunately I picked up an injury that ended the season for me‚ but other than that‚ it was a highlight in my career‚” he said.

“I was nervous‚ but thinking back there was no need for that. You just go out and play. The coaches select you for a reason‚ so it is important to reinforce their faith in you.

“This time around I have tournaments under the belt and I will be urging the debutants to enjoy the moment and not fear it. They are talented enough to make us a competitive side out there.”

Another senior in the squad‚ Zain Davids‚ said there is no difference in his role as one of leaders in the group.

“Normally the young guys bring the energy‚” said Davids‚ who plays in the forwards and has scored five tries in 36 matches.

“It will be good to have that‚ but I have learned that everyone must bring that. A team full of energy will be hard to beat.

“The most important aspect when we run out to face South Korea on Friday will be to play as we have trained.

“We need to trust our processes‚ trust each other and make sure we play for one other. If we do that‚ things will go well.”