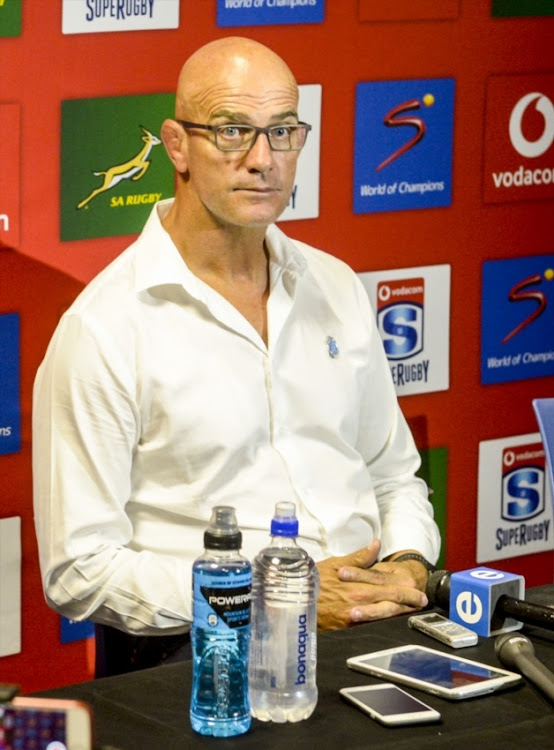 Coach John Mitchell of the Bulls during the Super Rugby match between Vodacom Bulls and Emirates Lions at Loftus Versfeld on March 03, 2018 in Pretoria, South Africa.
Image: Sydney Seshibedi/Gallo Images

Winless after four consecutive matches in Super Rugby‚ the Bulls have returned to the comfort of Loftus and coach John Mitchell wants his charges to fully take advantage of their home ground advantage.

The Bulls have a mountain to climb to refresh their campaign and that mission starts with a tricky clash against Stormers in Pretoria on Saturday afternoon.

As they prepared for the Stormers' visit‚ Mitchell called on his charges to avoid getting caught up in the pre-match hype that always surrounds the build up to this mouthwatering north-south derby clash.

“It is important that we focus on our processes and what we have to get right to be consistent.

"I don’t really get into all that stuff about talking the game up‚ I just deal with the week at hand and I know that the Stormers have played some good football.

"They move fast and I think it will be a really good game up here‚” he said at Loftus this week.

“They have been at home for the past two weeks where they had good wins over the Blues and the Reds.

"They also experienced a difficult tour in their overseas trip but for us it is important that we enjoy playing at home‚ embrace it and get on with this competition.”

The Bulls will face the Stormers without key Springboks lock Lood de Jager‚ who has been ruled out with a calf injury he sustained in the loss to defending champions Crusaders in Christchurch last week‚ while RG Snyman has not recovered from a fractured cheekbone injury he suffered against the Chiefs.

Their unavailability means Mitchell will have to find a new lock pairing and the most likely option is to have either Ruben van Heerden or Hendre Stassen covering for De Jager with Jason Jenkins taking the other place in the engine room.

“We are looking at more or less the same team for the Stormers and we are hoping to be in a better position.

"What I have seen from our overseas tour is that we are fighting‚ it is obvious that we have to ask the forward pack to be consistent and our backs have been on terrific form and they have delivered good form.

"This competition is home dominated because most of the teams win at home‚ our challenge as the coaching group is to make sure that we work on consistency.”