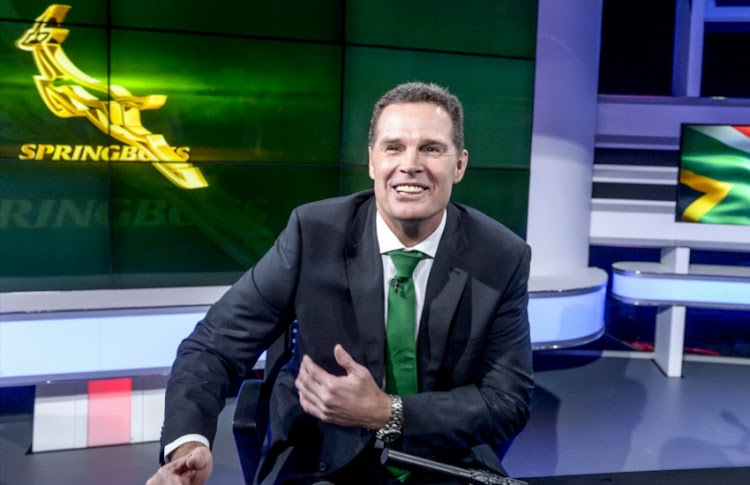 Rassie Erasmus is announced as the new Springbok coach during the Announcement of New Springbok Management at SuperSport Studios on March 01, 2018 in Johannesburg, South Africa.
Image: Sydney Seshibedi/Gallo Images

Springbok coach Rassie Erasmus named his first training squad on Tuesday‚ which only consisted of 11 Bulls players due to Super Rugby constraints.

The likes of inexperienced scrumhalf Embrose Papier and flank Roelof Smit were included while Handré Pollard and Jesse Kriel are among some stalwarts in the group.

The first of three alignment camps will be hosted from 1 to 4 April in Vanderbijlpark‚ south of Johannesburg.

The second camp is scheduled to run from 8 to 11 April‚ also in Vanderbijlpark‚ while Durban will host the third assessment camp from 22 to 25 April.

The Bulls players will meet up with Erasmus‚ his assistant coaches and the rest of the Springbok management for the first of three sessions‚ where the focus will be on aspects such as on-field alignment‚ strength and conditioning‚ medicals and rugby fundamentals.

No on-field activities are scheduled at this stage. Erasmus explained that the camps were planned with both the Springbok preparations and the local teams’ Super Rugby commitments in mind.

“As much as we don’t want to disrupt the weekly preparations of our Super Rugby teams it is equally important that we continue with preparations of the Springboks in the background‚” said Erasmus.

“The Bulls have a bye on the weekend of 7 April‚ the Stormers and Lions are not involved the following weekend (14 April) while the Sharks are not in action on 28 April‚ allowing us the opportunity to assemble in three groups.

“We will be starting as a new group and it is therefore also very important that the Springbok coaches meet‚ engage and strategise with as many players as possible we have in mind for the forthcoming Tests against Wales and England.”

According to Erasmus‚ his coaching staff are working closely with the local Super Rugby franchises in the build-up to the international season.

“As part of our constant engagement with the Super Rugby teams‚ our assistant coaches have been visiting them to help build a strong relationship and also to get a better understanding of how they prepare their teams.

“The Pro14 season is nearing its end and we plan to spend similar time in future with the Southern Kings and the Cheetahs.”

The Springboks start their international commitments with a historical clash against Wales in Washington DC on Saturday‚ 2 June.

They will then return to South Africa to play England in the Castle Lager Incoming Series‚ which consists of three Tests on consecutive weekends.

Ellis Park in Johannesburg will host the series opener on 9 June‚ the second Test takes place on 16 June at the Free State Stadium in Bloemfontein‚ and the final match in the series will be contested a week later at Newlands in Cape Town.