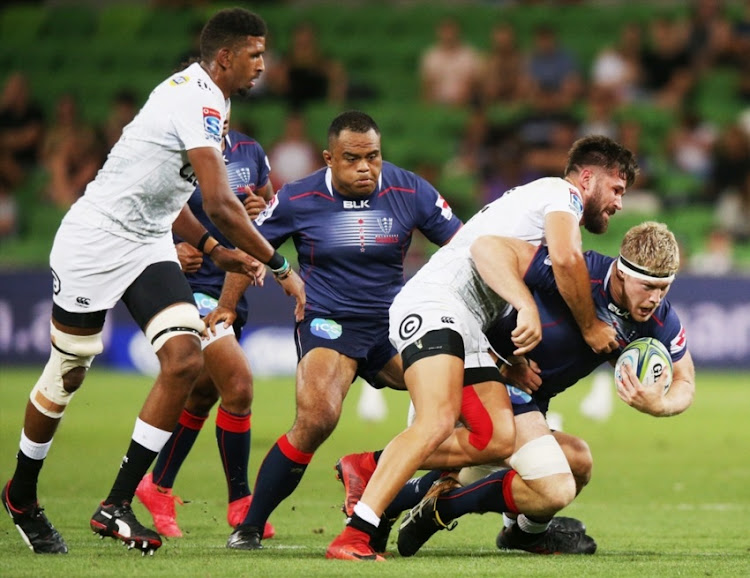 Matthew Philip of the Rebels gets tackled during the round six Super Rugby match between the Melbourne Rebels and the Sharks at AAMI Park on March 23, 2018 in Melbourne, Australia.
Image: Michael Dodge/Getty Images

The Sharks’ Super Rugby season lurched from one unqualified disaster to another when they were crushed 46-14 by the Rebels in Melbourne on Friday.

Ordinarily‚ the Sharks would have been backed to win this game but with each fixture‚ it looks like the Durban outfit aren’t cutting the mustard this season.

It was their third loss of this campaign but this is currently the most galling. The Sharks were outplayed in most facets and they looked like a team who rocked up to the AAMI Stadium in body but not in spirit and mind.

The Sharks only have won one out of five matches and with two games in New Zealand against the Blues and the Hurricanes remaining‚ their tour could go from bad to worse.

It’s about at this time of the season where championship sides start to make their presence felt but after two consecutive losses in Australia‚ the Sharks are clearly not in this category.

There’s a lot that Robert du Preez and his coaching staff have to answer for because a two-time Super Rugby quarterfinalist cannot be ramshackle overnight.

Soul-searching and introspection will have to be the order for the week for the Sharks with the dangerous and inconsistent Blues hovering menacingly.

While the Rebels are clearly Australia’s best side despite their second-half meltdown against the Waratahs last week‚ they were streets ahead of the Sharks and full value for their bonus point win.

Their adherence to basics forced the Sharks into elementary mistakes and their newly-found ball retention ensured the Sharks put in what became a futile overtime defensive shift.

Rebels hooker Anaru Rangi scored first-half tries (11th and 38th) and from the rolling maul to give the hosts a 15-7 half-time lead.

If Reece Hodge was more accurate from the kicking tee‚ the lead would have swelled significantly but more importantly‚ the Rebels were making the most of their attacking 5m lineouts.

The Sharks scored through Lwazi Mvovo in the 28th minute after Lukhanyo Am broke the line and offloaded to Robert du Preez who then passed to Mvovo.

That was the only Sharks highlight of the first half as they were outsmarted by a resourceful and well-drilled Rebels.

The Sharks had scrum dominance for the better part of the game but couldn’t convert that into something tangible.

Dave Wessels’s side took the game by the scruff of the neck in the second half with tries from scrumhalf Will Genia (56th)‚ inside centre Billy Meakes (63rd) and reserve utility forward Ross Haylett-Petty (68th).

With the Rebels leading 39-7 at this juncture‚ the game was over as a contest but the Sharks scored nine minutes later through inside centre Marius Louw.

The Rebels weren’t about to let a consolation try rain on their rugby parade and reserve prop Fereti Sa’aga wormed his way over with the last play of the game to confirm the hosts’ dominance and the Sharks’ inferiority.