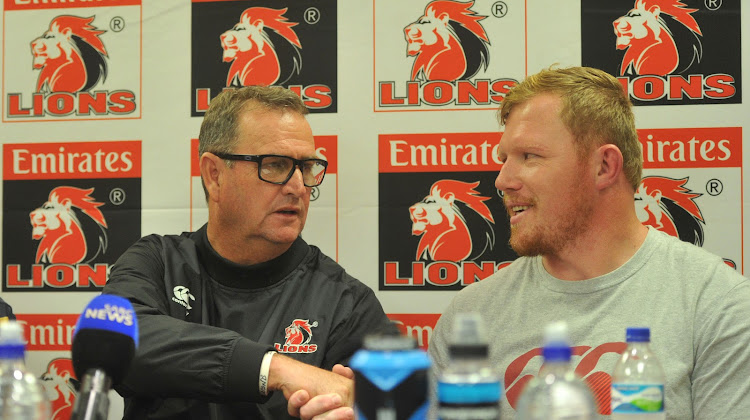 It was Lions’ coach Swys de Bruin‚ and not his grizzled Bulls counterpart John Mitchell‚ who delivered some home truths in the aftermath of the Trans Jukskei derby.

Although the Bulls are in the throes of a revival and have embraced a new free spirited playing style‚ the Lions went all medieval on their rivals by using their muscle men upfront to beat the hosts into submission.

The 49-35 scoreline flatters the Bulls a tad but they did play with 13 players for a while due to ill discipline.

“You can only play the game you want to play if your tight phases are up to scratch. That’s your bread and butter.

"Our bread and butter was good‚” De Bruin noted sagely.

The Lions’ driving maul proved the slow poison for which the Bulls had no antidote.

“Three of our tries were maul tries and that builds character in the pack‚ as well as confidence.

“Hats off to coach Philip Lemmer and Franco (Mostert) and the tight boys upfront‚ as well as Waza’s (Warren Whiteley) leadership.”

Knowing what benefits could be derived from resultant mauls‚ De Bruin grudgingly acknowledged that the Lions had targeted the Bulls at line-out.

Part of the plan involved moving regular lock Franco Mostert to blindside flank where he could provide more bulk in the tight loose along with the barrel-chested Cyle Brink and it worked a treat.

Mostert soared higher than anybody else and passed his test with flying colours.

“I was nervous but knowing Franco‚ he’s quick and he can run all over‚” said De Bruin.

“He was absolutely unreal. That worked well. He can play seven or lock at any time. The ice is broken.”

Captain Whiteley stressed the importance of having a plan and focusing on the things that matter.

“It is important for us not to get caught up in the hype‚” he said of all the pre-match talk about the Bulls’ revival under Mitchell.

“We really wanted to focus on what we wanted to do. We want to stick to our processes. We did phenomenally well‚ especially our pack.”

Whiteley‚ last year’s Bok captain before he got injured did his chances no harm against the Bulls.

“Rassie’s appointment brings clarity for everyone.

“First and foremost I think every player is focused on performing at their union. My focus is at the Lions‚” said Whiteley.

It isn’t just the players who seek recognition. The win at Loftus would have been a personal triumph for De Bruin who had to pit his coaching wits against the streetwise Mitchell.

“I am an emotional kind of guy. I talk from the heart and the players know me like that. I don’t want to change but I am very humbled by this win I thank God that I have the opportunity to coach players like these.

“Let’s not be fooled by one game. We said from the word ‘go’ that this is 15 or 16 hurdles and we take one at a time. The worst thing we can do is to get ahead of yourselves.”

“It is a good start but we also know Super Rugby isn’t won in February and March. We just need to keep building.

"There is quite a lot to work on. Especially at the end where I thought we could have kept them out.

“We had one or two soft moments. There were great positives.”

Meanwhile‚ the Lions have announced the appointment of Sean Erasmus to their coaching ranks from 1 November.

Erasmus is currently the director of coaching at Paarl Boys High.

Older players in the Sunday rugby league in Mooiplaas‚ outside East London in the Eastern Cape‚ bullied Thembelani Bholi with heavy body blows when ...
Sport
4 years ago

The Sharks and the Waratahs had forgettable scrumming outings in their previous Super Rugby fixtures‚ something that'll make their meeting on ...
Sport
4 years ago

The Bulls face a possible backline problem when they take on bitter rivals Lions in the highly anticipated Super Rugby derby clash at Loftus on ...
Sport
4 years ago
Next Article