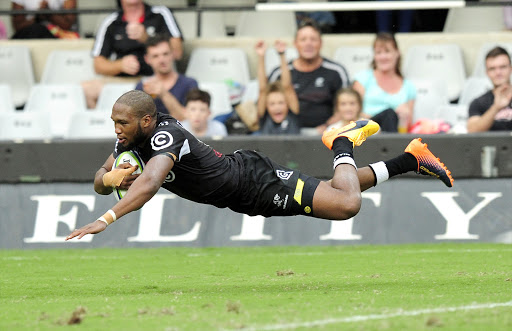 Lukhanyo Am of the Cell C Sharks scores a vital try for the Sharks during the 2017 Super Rugby game between the Sharks and the Force at Kings Park, Durban on 6 May 2017.
Image: Gerhard Duraan/BackpagePix

The Sharks and the Waratahs had forgettable scrumming outings in their previous Super Rugby fixtures‚ something that'll make their meeting on Saturday at King's Park quite interesting.

Despite beating the Stormers 34-27 in Sydney‚ the Waratahs were reduced to mince-meat at the set-piece by Steven Kitshoff.

The Sharks‚ who had a bye last weekend after their 26-19 opening round defeat at the hands of the Lions‚ were scrummed into the ground by a rampant Lions pack led by Jacques van Rooyen.

Sharks and Springbok prop Tendai “Beast” Mtawarira came off the bench to salvage what was left of the their scrum in Johannesburg but the horse had long bolted.

“We weren't happy about our performance against the Lions. It was substandard‚" Mtawarira said.

"The guys were working hard at the facet during the pre-season.

"We just went back to the basics to ensure we've got cohesion.

"The scrum is something we want to rectify on Saturday and something we're taking very personally.

“The Waratahs have an experienced pack but we're not looking too much into the Stormers game.

"We're looking at the game as a new challenge and an opportunity for us to make a step up and tick a box we skipped in the Lions game.”

Sharks coach Robert du Preez made five changes to the side that lost to the Lions.

Makazole Mapimpi made way for Kobus van Wyk at wing while Louis Schreuder returned to his starting berth at scrumhalf.

Du Preez said the Waratahs were going to be a tough proposition.

“I haven't seen too many weaknesses at this stage but they've improved a lot from last yea‚" Du Preez said.

"They have players who have the X-factor.

“This competition is about testing you against the best players in the world and they certainly have a few of those in their team.”