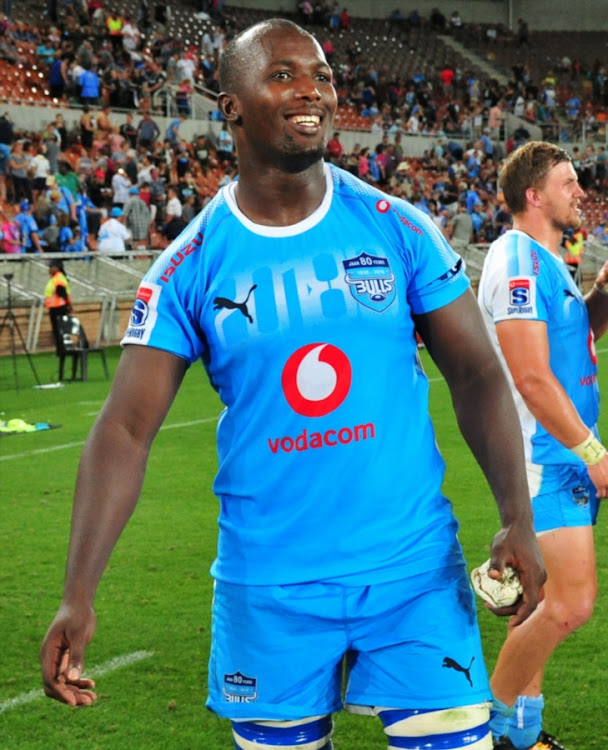 Older players in the Sunday rugby league in Mooiplaas‚ outside East London in the Eastern Cape‚ bullied Thembelani Bholi with heavy body blows when he was growing up but little did they know that they were preparing him for the rigours of Super Rugby.

The 28-year old Bholi‚ who was a surprise inclusion in John Mitchell’s starting line-up for their opening Super Rugby win over the Hurricanes at Loftus last week‚ has come a long way from the days when he played rugby barefoot with little hope of hitting the big time.

He impressed throughout the junior levels to the provincial U21 side before moving to the Kings in Port Elizabeth‚ then the Pumas in Nelspruit and finally arrived at Loftus in Pretoria.

He made his debut for the Bulls last week and is hoping to establish himself at this level. “I used to play with older players who used to smash me all over the place all the time‚ but those harsh experiences toughened me up‚" he said.

"The lessons I learned there are coming handy for me because Super Rugby is a hard competition.

"You come up against top quality players every week and you have to be strong to take whatever is thrown at you.”

The Bulls are preparing for the mouthwatering visit by bitter rivals the Lions at Loftus on Saturday in a game that has captured the imagination of the nation's rugby lovers.

Bholi played in the opener against the Hurricanes after impressing Mitchell in the latter stages of pre-season.

He was not named in the initial Bulls squad in January but seemingly did enough to convince Mitchell in the final weeks of pre-season.

“I had to kick the door down and force my way into the reckoning because no one was going to fight for me‚" he said‚ adding that he enjoys competition for places at the Bulls.

"Coach Mitchell has shown trust in me and I have to repay him‚ the franchise and the fans by showing them what I can do on the field.

"I have enjoyed my time here at the Bulls because last year I was in Nelspruit with the Pumas which was too far from home.

“I have to fight for every opportunity because there is a lot of competition in my position and I also I want to play most of the Super Rugby games so that I can become a better player.”

Looking ahead to the Lions clash‚ Bholi‚ who will be making his second Super Rugby appearance in the tournament‚ said they are expecting a tough task against the visitors who also started the campaign with victory over the Jaguares last week.

“We know that the Lions are going to come hard at us but we are ready for whatever they are going to throw at us‚" he said.

"We are taking it one step at a time and we are going to do what we do best.

"We did well against a good New Zealand team like the Hurricanes and we will have to reproduce that performance again because there are no easy games in this competition.”

Bulls new era under coach John Mitchell in Super Rugby is up and running after they recorded a hard fought and vital 21-19 victory over fancied ...
Sport
4 years ago

The Bulls face a possible backline problem when they take on bitter rivals Lions in the highly anticipated Super Rugby derby clash at Loftus on ...
Sport
4 years ago

Rugby may be a team sport but each unit has that one player that embodies the mental state of the team.
Sport
4 years ago
Next Article