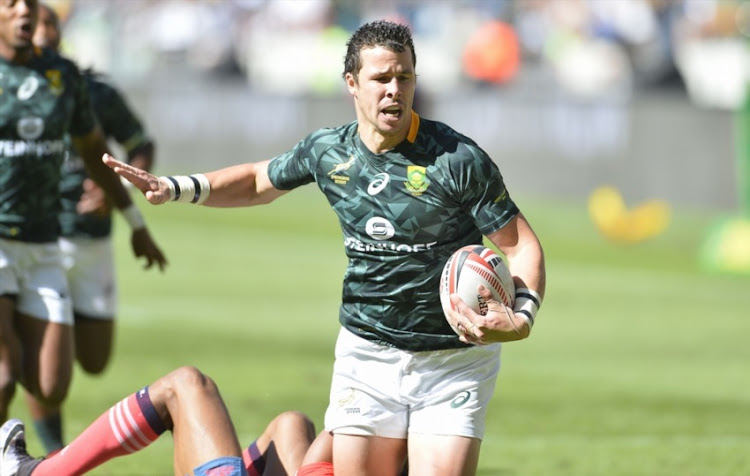 The Blitzboks are going to have to do it the hard way in Hamilton if they hope to maintain their place at the top of the overall World Sevens Series standings after losing another player to injury.

Muller du Plessis‚ the 19-year-old potential debutant‚ suffered a hamstring injury in training on Thursday and has been ruled out of the tournament this weekend.

Du Plessis was included as the reserve player in the squad this week after Ruhan Nel and Philip Snyman were both injured during last week’s Sydney Sevens‚ where the Blitzboks were runners-up after losing 29-0 to Australia in the final.

SA still head the standings with 58 points after three rounds. New Zealand are second on 54 and Australia third with 43.

With Du Plessis out‚ Branco du Preez has been summoned from Cape Town at short notice‚ but is only likely to arrive in New Zealand on Saturday morning.

The veteran of 57 World Series tournaments‚ was originally left out of the Australasian touring party with a hamstring injury‚ but has fully recovered.

Du Plessis only joined the squad on Tuesday evening as a replacement for Nel‚ but a hamstring strain picked up during the defence session ruled him out as well.

Meanwhile‚ Kwagga Smith had some discomfort after rolling his ankle in training earlier in the week and a final call on his participation will be made on Friday.

Coach Neil Powell said a lot of work has gone into this weekend's tournament‚ although not all of it on the field: “As the guys were sore and stiff early in the week‚ we managed to get through a lot of discussion and analysis on what happened in Sydney and how we want to play in Hamilton‚” Powell said.

“I am happy with the work done and the field sessions were also productive. Unfortunately‚ we lost Muller now‚ so he will not be part of the squad.

"He will‚ however‚ stay with us to get a good look at the way we operate during tournaments and how we prepare.

“It will be a good experience for him‚ although he will not be able to play.”

Powell stated the importance of a good performance this weekend: “The senior players will have to make another step-up‚ given the misfortunes we had this week.

“We are happy with our log position (leading the series) as this is some indication that we are doing some things right‚ but we always strive for improvement‚ so this weekend will be another opportunity to do so.”

Captain Kyle Brown‚ who takes over from Snyman as skipper this weekend‚ is happy with the team’s start to the season‚ but is looking for better consistency of performance.

“We always look for consistency in our performance and to go to two finals and a semi-final is not the worst way to start the series‚” said Brown.

“We weren’t our best in Cape Town and last weekend Australia just blew us out of the water on that one.

South Africa opening their account against invitational side‚ Papua New Guinea in Pool B and have further matches against England and Russia.