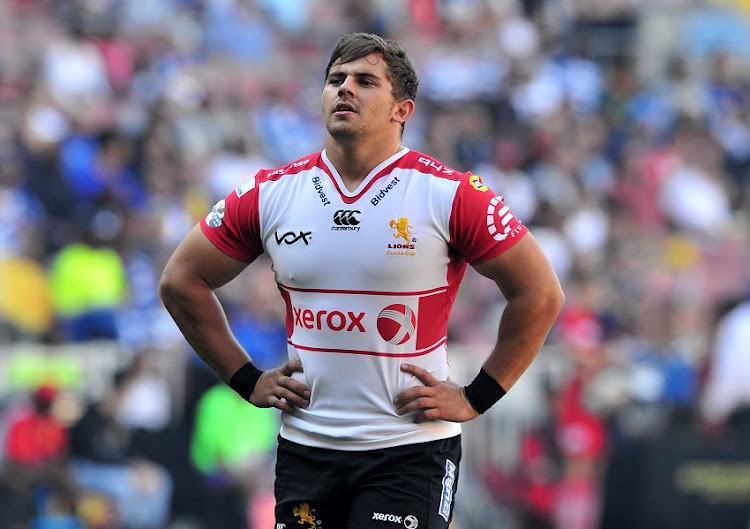 Rohan Janse van Rensburg of the Lions during the 2017 Currie Cup semifinal game between Western Province and the Lions at Newlands Rugby Stadium, Cape Town on 21 October 2017.
Image: Ryan Wilkisky/BackpagePix

Lions centre Rohan Janse van Rensburg is the latest in a growing list of players to take up a short-term British club contract after the Sale Sharks announced he would join them.

Janse van Rensburg‚ who was overlooked by the Springboks for their current northern hemisphere tour‚ will be at Sale for three months.

He is set to return for Lions Super Rugby duty in February.

It’s a similar deal to the one which Stormers and WP looseforward Nizaam Carr took up with Wasps two-weeks ago.

These types of contracts are also another reminder of how tough finances are at local unions that they are willing to let star players forgo an off-season so that they can be removed from the payroll for three months.

Janse van Rensburg missed a large part of the 2017 Super Rugby campaign with a knee injury‚ so isn’t in desperate need of time off from the game.

But Carr has played non-stop for over a year.

Sale were naturally ecstatic to be able to call on Janse van Rensburg for the next 12 weeks as they look to improve their current 10th position in the 12-team English Premiership.

Sale Sharks director of rugby Steve Diamond said he was delighted to welcome the exciting young South African to the club.

“Rohan is a powerful‚ highly abrasive centre and we are very happy that he will be joining up with us‚” said Diamond.

“He’s only 23 and I’m sure he will be an excellent addition to our squad.

“He was recommended by Faf De Klerk and Josh Strauss and everyone here is looking forward to welcoming Rohan to the club."

Janse van Rensburg has been capped once by the Springboks‚ against Wales in 2016‚ but after an injury plagued year that has also been marred by personal tragedy‚ he hasn’t reached the heights he achieved last year.

The 1.88m‚ 105kg centre lost his mother to cancer early in the year and then was a victim of an horrific house-breaking ordeal a few months later.

“It has been a rough year‚” Janse van Rensburg told sarugbymag.co.za.

“With all that has gone on‚ I thought it might be a good thing to go and experience playing in a different environment for a bit‚ and I’ll hopefully come back an even better player.

“I’ll also be back in time for the start of Super Rugby with the Lions‚ while the ultimate goal obviously remains to make it back into the Bok squad.”

The 23-year-old began his professional career with the Blue Bulls in the 2013/14 season‚ making seven appearances and scoring four tries before moving to the Lions rugby set-up where he has also been a key figure for Golden Lions in their recent Currie Cup campaigns.

Rohan's breakthrough season in Super Rugby came in 2016 when he scored 10 tries as he helped the Lions reach the Super Rugby final.