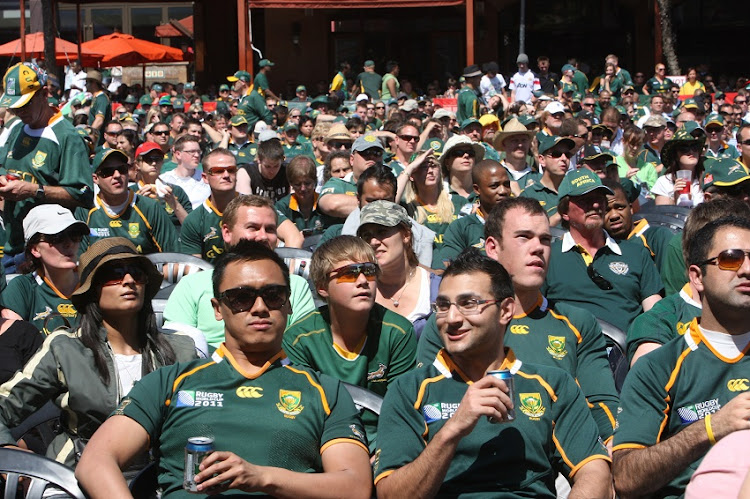 Boktown at Montecasino opened its doors for springboks fans who came in numbers to watch the Springbok opening match against Wales on the big screen. The Boks won 17 to 16 sending the fans into the state of elation even though the win was tight and Wales took the lead at some stage in the game lowering the emotions of the bok fans.
Image: SYDNEY SESHIBEDI. 11/09/2011.

SA Rugby officials are calling on South Africans to wear green on Friday to show support for the country’s 2023 World Cup bid that has come under fire from opponents in recent days.

The World Rugby Board assessed all the bids and recommended SA as the host of the tournament last week ahead of rivals France and Ireland‚ who came second and third respectively.

SA Rugby’s bid was the clear winner‚ but their opponents have questioned the legitimacy of the assessment and made public their grievances to World Rugby.

These include the high crime rate‚ an inability to fill stadiums for Super Rugby matches‚ the continuing threat of a ratings downgrade and South Africa’s u-turn on hosting the 2022 Commonwealth Games‚ among others‚ as reasons why the country should not host the event.

“Our hosting of the World Cup is crucial for South African rugby for the next six years and beyond that‚” SA Rugby General Manager of Corporate Affairs Andy Colquhoun said in an interview on Radio 702 on Thursday morning.

“We want to recapture some of that 2010 [Soccer World Cup] and 1995 [Rugby World Cup] spirit‚ so we are urging people to show their support for the bid by wearing green on Friday.”

Colquhoun did not mention the bid’s detractors‚ but did reaffirm South Africa’s credentials as hosts ahead of next Wednesday’s vote of the World Rugby Council in London that will finalise the issue.

“The Rugby World Cup Board has agreed we have a triple win – we can deliver record profits‚ we can host a [attendance] record final at FNB Stadium and more tickets than ever before will be on sale in a fabulous country with fabulous stadiums‚” he said.

A number of countries have already thrown their weight behind South Africa ahead of the vote that should‚ all things being equal‚ be a simple rubber-stamp of the recommendation by the Rugby World Cup Board.