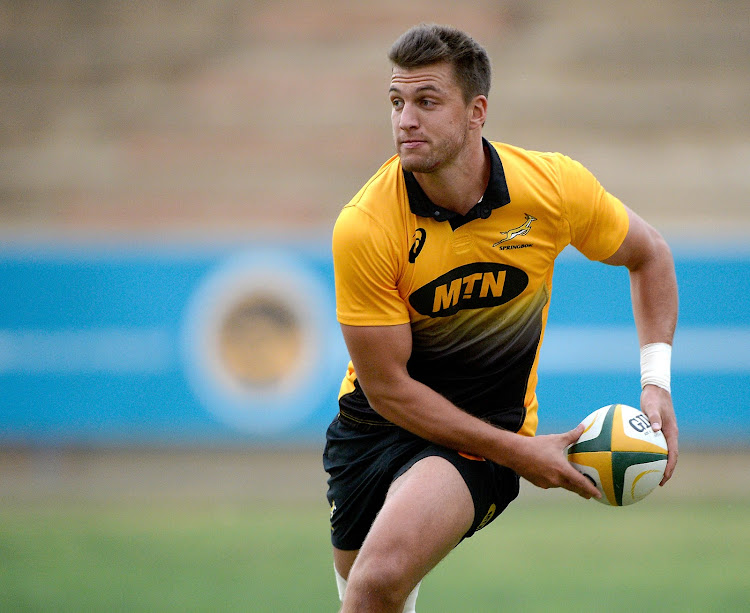 Allister Coetzee may have to curb his urge to tinker with his halfback combination when the Springboks play Ireland in their European tour opener in Dublin on Saturday.

Coetzee intimated earlier this week that given the flyhalf's recent familiarity with the squad structures‚ Handre Pollard may occupy the inside lane to a starting berth ahead of Elton Jantjies.

The coach noted that “Elton has been away (with his Japanese club NTT Shining Arcs)”.

Pollard‚ by contrast‚ has been part of the Bok preparations in recent weeks after he recovered from injury.

He was among 12 players who were invited to a four-day assessment camp in Cape Town last month.

Pollard has made a very gradual return to the Springbok squad after he was ruled out of combat last season.

He replaced Jantjies in the 55th minute of their 25-24 defeat to the All Blacks at Newlands but had to leave the field for a concussion test 17 minutes later.

The Bulls flyhalf also replaced Jantjies in the 58th minute of the Springboks' 57-0 hammering against the All Blacks in Albany.

He and the coach copped criticism then as the player looked well short of the physical and psychological demands of playing the All Blacks on their own patch.

The last time Pollard started a Test was at the 2015 RWC when he played against Argentina at the Olympic Stadium.

Ruptured ligaments kept him on the sidelines last year‚ while an ankle injury further delayed his return this season.

He returned to the Green and Gold as a substitute in Albany with relatively little game time under his belt.

Before Coetzee is tempted into making the change at flyhalf a SA Rugby insider‚ who wished to remain anonymous‚ warned that the coach will have to come up with concrete reasons to do so.

The source said it was unlikely that Pollard would leapfrog Jantjies into the starting team this weekend.

“I can't see how that can happen‚" the insider said.

"Pollard hasn't been playing much.

"The one guy doesn't deserve to be demoted and the other hasn't done enough to be elevated.”

Coetzee‚ however‚ who has talked up the Irish halfbacks Conor Murray and Johnny Sexton over the last while‚ is desperate to combat the hosts' confrontational approach from the base and first receiver.

Sexton will no doubt dart run Jantjies' channel and the coach may feel the sturdier presence of the Bulls man is a better fit for the occasion.

The Bok team for Saturday's Test will be announced on Thursday.