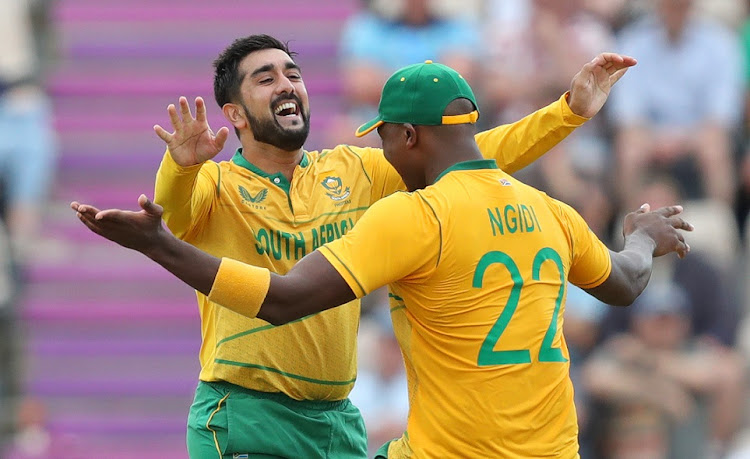 Tabraiz Shamsi of SA celebrates a wicket with teammate Lungi Ngidi in the third T20 at the Rose Bowl in Southampton.
Image: Henry Browne/Getty Images

Proteas head coach Mark Boucher believes SA cricket is in a healthy state and he anticipates a tough time for the national selection team ahead of this year’s T20 World Cup.

The Proteas have enjoyed good success in the white ball cricket format, winning their 2-0 T20I series match against Ireland in England on Friday night.

Boucher’s side also defeated England 2-1 in a three-match T20 series while the ODI series ended in a draw.

There have been some good performances from almost everyone in the team including the national team returnees Wayne Parnell and Rilee Rossouw.

The two had been absent in the national team after they took Kolpak deals and ruled themselves out for Proteas selection.

However, they are now available for SA since Brexit and Boucher said the two players have added a lot of depth and different dimensions for the national team.

“I think if you look at their performances since they came back, they have been fantastic in the set-ups. I think they have added a different dimension to SA cricket, especially for the Proteas,” Boucher said.

“When you’ve got guys like that coming in and performing, there’s no space for anyone to rest (on their laurels). When Players keep challenging for spots they can only push each other to different heights as we’ve seen in the last few games. I think it’s a very healthy spot for SA cricket to be in,” he said.

With almost everyone raising their hand for a spot in the 15-man squad that will be selected for the T20 World Cup to be staged in Australia from October, Boucher said it will be tough for selectors, but at least they have a strategy they will use to pick the final squad.

“I think that’s a strategy I don’t want to give away. All I can say is that I’m part of the selection panel and we’ve got some tough choices to make and I’m sure we will be able to make those,” Boucher said.

“There’s a lot of guys competing but unfortunately you can only take 15 to the World Cup and we are going to have to look at the opposition that we will be playing and make some smart decisions when we select for that World Cup.

“It’s a very good position for us to be in, but the panel will have to knuckle down and select the 15 that we believe is going to come home with the trophy.”

The Proteas will now shift focus to a three-match Test series against England, starting on Wednesday, August 17.

The Proteas are sweating over the fitness of fast bowler Kagiso Rabada, who is nursing an ankle injury.

South Africa seamer Wayne Parnell claimed career-best figures of 5-30 as they cruised to a 44-run victory over Ireland and completed a clean sweep of ...
Sport
1 week ago

Rabada ruled out of Proteas’ two-match T20 series against Ireland

The Proteas have been dealt a blow ahead of their two-match T20 series against Ireland with the withdrawal of premier fast bowler Kagiso Rabada.
Sport
2 weeks ago

Shamsi: ‘There is a nice thing building within the Proteas’

Proteas spin wizard Tabraiz Shamsi believes the squad can take much confidence from their all-around performance after securing a thrilling T20 ...
Sport
2 weeks ago

‘Stubbs has raised his hand for Proteas place at T20 World Cup’: Ngidi

Proteas bowler Lungi Ngidi says the team was not surprised by Tristan Stubbs' heroics in Tuesday's big T20 defeat against England and believes the ...
Sport
2 weeks ago
Next Article