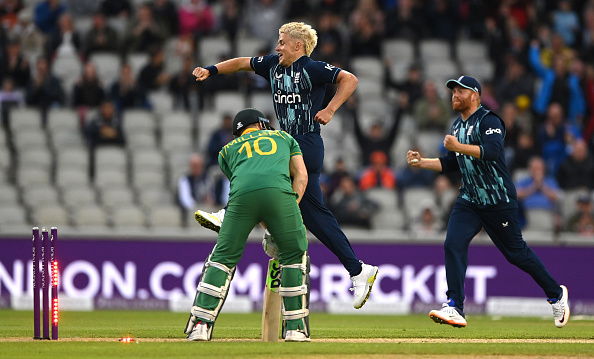 England thrashed a dismal Proteas by 118 runs during their rain-affected 2nd ODI at Old Trafford in Manchester to level the series 1-1 with one match remaining.

They travel to Headingley on Sunday for the decider and England will have their tails up as a result of this impressive all-round performance where they made SA look ordinary.

The start of this second match was delayed by about three hours by rain and this resulted in overs reduced to 29 a side.

When it was finally deemed safe to play, SA stand-in captain Keshav Maharaj won the toss and opted to field and the Proteas managed to bowl England out for 201.

This was for the fifth consecutive time England were bowled out in an ODI and SA appeared to have momentum but their chase was a complete mess as they were bowled out for 83 after 20.4 overs.

SA found themselves in serious trouble on 6-4 after 3.5 overs after Malan, Van der Dussen and Aiden Markram were dismissed for golden ducks while De Kock returned to the pavilion having scored only five runs.

After Markram was run out by Jos Buttler, SA tried to get back into the game with the notable partnership between David Miller and Heinrich Klaasen that produced 21 off 29.

Miller (12) perished and it was time for Klaasen and Dwaine Pretorius negotiated another partnership that produced 39 off 36 and it tumbled when Klaasen was dismissed.

Wickets continued to tumble with Keshav Maharaj (1), Dwaine Pretorius (17), Anrich Nortjé and Ngidi (0) as they ultimately fell to their joint lowest score against England in ODIs.

Stars for England with ball in hand were Adil Rashid, with the three wickets of Pretorius, Maharaj and Ngidi, and he was supported by Moeen Ali and Reece Topley with two each.

Sam Curran and David Willey ended their shifts with one scalp each.

Earlier in the game, Dwaine Pretorius recorded his career-best haul with impressive figures of 4/36 from 6 overs after he claimed the scalps of Jonny Bairstow, Phil Salt, Joe Root and David Willey.

Pretorius was impressive early on in the innings as he rattled the English top order by removing Bairstow, Phil Salt — who was handed a start at number three in the first match after the ODI retirement of Ben Stokes — and Joe Root.

Closest to Pretorius was Anrich Nortjé with the wickets of Jason Roy and Liam Livingstone and Tabraiz Shamsi who accounted for the dangerous Jos Buttler and Sam Curran.

With the bat, England struggled to get going with Livingstone (38) and Sam Curran (35) as their top scorers. It is also worth noting that they got three maximums each.

Cricket SA (CSA) has appointed Graeme Smith to lead the new T20 League scheduled to take place in the country in January and February next year.
Sport
3 weeks ago