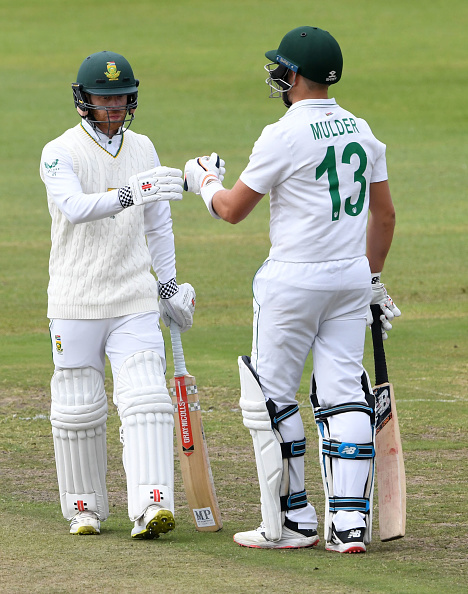 The Proteas continued to pile on the runs as they moved to 384/7 at lunch on day two of the second Test against Bangladesh in Gqeberha on Saturday.

Buoyed by the two late wickets on Friday, the Bangladesh bowlers kept things tight during the opening exchanges where they conceded just three runs in the first two overs of the day.

Verreynne struck two boundaries and Mulder a third in overs 93 and 94 to get things going for the home side.

In possibly the most notable moment of the first session, there was an altercation in the 96th over when Khaled Ahmed, collecting the ball after a defensive shot was played by Verreynne, proceeded to throw the ball in the direction of the stumps.

The ball hit Verreynne on the hand leading to an exchange of words between the players but umpire Marais Erasmus stepped in and calmed things down.

The ginger-haired right hander responded in the next Khaled over, smashing the right hander to the boundary to take the Proteas past 300.

However, Khaled then got a delivery to sneak through Verreynne’s defences and crash into the middle stump to dismiss the wicketkeeper batsman for 22 off 48 a few balls later.

Maharaj joined Mulder in the centre and got his score moving in an upward direction when he sent Khaled to the boundary twice in the 99th over.

He then welcomed Taijul Islam into the attack with two massive sixes and a four in consecutive overs by the left armer.

Mulder’s boundary off Taijul saw the Proteas move to 350 in the 106th over and also brought up the 50-run partnership off 56 balls.

Mehidy Hasan was not immune to the lower order onslaught, conceding 12 in his first over before a third Maharaj maximum off Mehidy a few overs later took him to a fourth Test half-century, which was the fourth of a fruitful first innings for the home side.

Mulder, looking to kick on, was undone by a spinning Taijul delivery which sent the all-rounder packing for 33 off 77, ending an 80-run seventh wicket stand with Maharaj, with the score on 381.