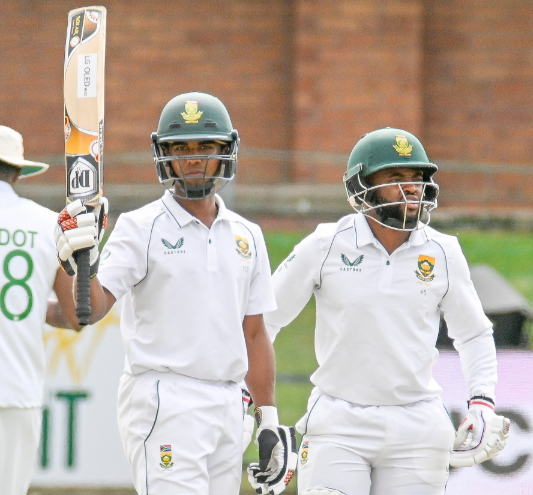 Keegan Petersen of the Proteas was one of the notable contributors on day one at St Georges Park in Gqeberha.
Image: Deryck Foster/BackpagePix

Despite losing five wickets on day one of the second Test match against Bangladesh, Proteas batsman Keegan Petersen was confident they could build on their hard work on day two in Gqeberha on Saturday morning.

The Proteas number three, who has taken to the role like a duck to water since his 2021 Test debut, scored a patient 64 runs off 124 balls, alongside two other half-centuries by captain Dean Elgar (70 off 89) and Temba Bavuma (67 off 162).

When stumps were drawn on the rain-interrupted first day, the home side ended in a strong position having accumulated 278 with Ryan Rickelton, who is playing in his second Test, contributing a valuable 42 off 82 deliveries.

The early dismissal of Sarel Erwee (24 off 40) did little to throw the Proteas off their game as the visitors' bowling attack found the going tough in mostly overcast conditions at St George's Park.

A burst of late afternoon sunshine came at just the right time for Bangladesh, as Ahmed (2-59) and bowler of the day Taijul Islam (3-77) gave the travelling fans something to cheer about with two wickets either side of the second new ball in the final 10 overs.

Petersen, while happy with the overall performance, felt losing a wicket or two less would have been even better.

“I think it is a decent score, I think the wickets we lost towards the back end kind of levels it out a little bit, [though] I still think we are just a bit ahead in the game.

“It would have been nice to be three [wickets] down, then we are in the driving seat, and tomorrow [Saturday] becomes a stronger day for us, but I think we did well today.

“The wicket was a bit tricky, there was a bit in it for the seamers, but I think we dealt with it well enough to get us into this position,” Petersen told journalists at the close of play on Friday.

With the Proteas batsmen getting half-centuries but not being able to kick on and get the magical three-figure scores, Petersen said it was not for a lack of trying.

“I think that hundred just keeps eluding me, or us. It is not for a lack of trying, we are trying to get that big score but it is just not getting there for us.

“Hundreds would put us in better positions. I feel like getting fifty and out balances the game if we are whereas a hundred would keep us ahead.

“It has become a bit of a team effort with a couple of fifties and the lower order having some valuable contributions at the end.

“It has been working for us, but obviously we are not trying to go that way, it is just not working out for us with the three figures,” he explained.

Speaking about Elgar’s commanding leadership style, Petersen said he was a hard leader who expected the best from his teammates at all times.

“He is leading from the front, he has been very consistent, with having a young team to lead, I think he leads the way properly for us and we just try to follow him as best we can,” he said.