Half-centuries from Elgar and Bavuma give Proteas the early initiative 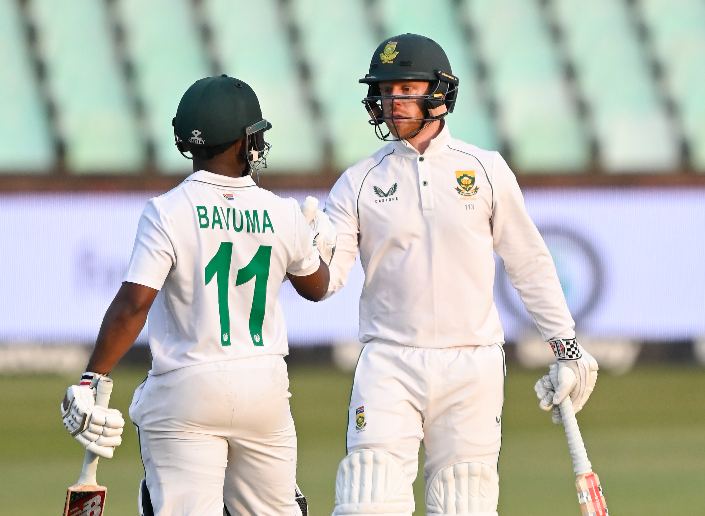 Kyle Verreynne congratulates Temba Bavuma after he scored his 50 in the third session of the first Test against Bangladesh at Kingsmead Stadium in Durban on March 31 2022.
Image: Gerhard Duraan/BackpagePix

SA have taken the early initiative in the first Test match against Bangladesh at Kingsmead Stadium in Durban with an acceptable opening day score of 233/4.

Bangladesh won the toss and elected to field and when bad light ended the day’s proceedings shortly after 5pm SA had a sizeable advantage largely due to well-taken half centuries by Dean Elgar and Temba Bavuma.

The first Test match at this venue since February 2019 when Sri Lanka stunned the Proteas with a one-wicket victory started with drama as sightscreens malfunctioned, delaying the start of play.

It is not clear whether Cricket SA (CSA) will be sanctioned by the International Cricket Council (ICC) as the embarrassing sightscreens issue delayed the match by about 30 minutes.

When action finally got under way in front of a small crowd of just over 1,000, the Proteas got off the blocks with intent, with openers Elgar and Sarel Erwee putting Bangladeshi bowlers under pressure.

Elgar and Erwee frustrated Taskin Ahmed, Ebadot Hossain, Khaled Ahmed and Mehidy Hasan Miraz, laying the foundation with a partnership of 113 off 202 that took the Proteas to lunch on 95/0 after 25 overs.

The most attacking of the Proteas' opening pair before lunch was Elgar as he raced to his 20th half-century in 60 balls and his knock of 88 minutes included nine boundaries.

SA’s innings stalled during the session due to the loss of Elgar, Erwee and Keagan Petersen in just 33 balls as Bangladesh managed to find the much-needed breakthroughs.

SA lost Elgar having scored 67 off 101 when he was caught behind by Liton Das, who pulled off a stunning diving save to claim the ball centimetres off the turf from the bowling of Khaled Ahmed.

Elgar gave Bangladesh some momentum and Mehidy Hasan Miraz joined the party a few overs later to remove Erwee, who chopped the ball on to his stumps.

The next man to fall for SA was Keagan Petersen, run-out by Hasan Miraz, who crushed his stumps at the striker's end with a direct hit from backward point.

The Proteas reached tea on 165/5 after 53 overs with Temba Bavuma (22) and debutant Ryan Rickelton (11) on a mission to rebuild the innings after the quick loss of Elgar, Erwee and Petersen.

Their promising partnership was broken shortly after tea when Rickelton, who was looking to impress on his debut, was caught at mid-on by Mominul Haque from the bowling of Ebadot Hossain.

Also high on the agenda for Bavuma and Verreynne will be adding to their promising partnership of 53 off 117 as the Proteas will look to take the game away from Bangladesh.