Lanning's epic knock steers Australia to victory against the Proteas 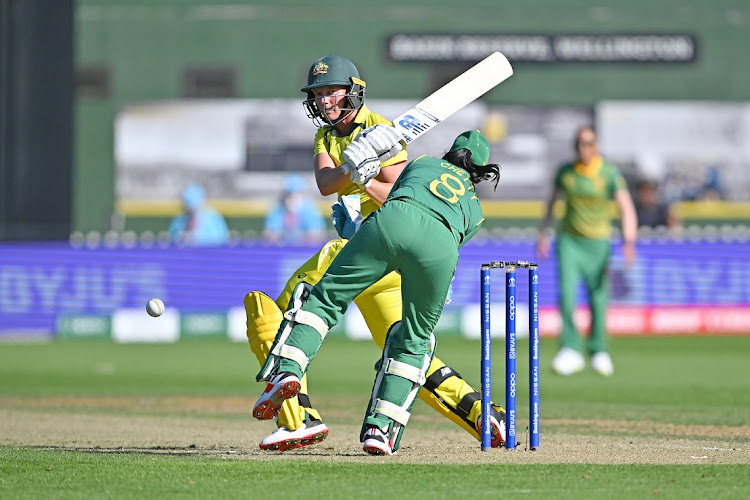 Meg Lanning’s swashbuckling 135 not out overshadowed Laura Wolvaardt and Sune Luus’ half-centuries after SA let themselves down with poor fielding to lose against a solid Australia who remain the only unbeaten side at the ICC Women’s Cricket World Cup.

SA posted a competitive 271-5 after they were asked to bat first at the Basin Reserve in the New Zealand capital of Wellington on Tuesday, but wasted an opportunity to make a statement win as they dropped several catches and lacked variety and sharpness in their bowling to lose by five wickets.

Australia went into the top-of-the-log clash having already qualified for the semifinals after winning five matches on the trot and entrenched their place at the helm of the eight-team table with another win that took them to 12 points from six matches.

SA, who are in second on eight points from five games, will need to conclude their pool stage matches by beating either the West Indies on Thursday or India on Sunday to confirm their place in the semifinals.

The Momentum Proteas’ chances were enhanced after third-placed West Indies were beaten by bottom team Pakistan in Tuesday’s other match at Seddon Park in Hamilton.

That means a win over West Indies on Thursday will seal SA's place in the semis regardless of what happens against India.

The eight points SA have accumulated could well be enough to advance to the knockout stages should either India or West Indies slip up.

The Proteas started well after Australia won the toss and chose to field with openers Lizelle Lee and Wolvaardt putting on an opening partnership of 88 before the former was dismissed for 36.

Lara Goodall (15) joined Wolvaardt for a 30-run partnership but it was a stand of 91 runs from 92 balls between Wolvaardt and captain Luus that steadied the SA ship in the middle overs.

Wolvaardt heartbreakingly got out on 90 and SA, at some point looking good to make 300, struggled to replicate the partnerships soon after her dismissal.

Goodall and Mignon du Preez (14) failed to build on the momentum and it was left to all-rounders Marizanne Kapp (30 not out) and Chloe Tryon (17 not out) to push the SA total to 271-5 at the end of their 50 overs.

Australia successfully hunted down 277, a world record, against India in their last match and SA, while boasting the best bowling attack of the tournament, needed to strike early to prevent the six-time champions from chasing down 272.

Strike early they did as Shabnim Ismail (2-33) removed dangerous Australian openers Alyssa Healy (5) and Rachael Haynes (17) in the first 10 overs, with Tryon accounting for another two Australian wickets.

SA were in with a chance to knock over the Australians but it was taken away by Lanning’s determined stroke-play and meaningful contributions from their middle-order.

Australia always kept the required rate in check as Beth Mooney (21), Tahlia McGrath (32) and Ashleigh Gardner (22) and another 22 from Annabel Sutherland took the sting out of the SA attack, which lacked variety with Tryon the only slower bowler.

Tumi Sekhukhune understandably struggled for control in her first World Cup match and though she ended as the most expensive SA bowler, she pulled it together and only conceded 68 runs in her seven overs.

The 23-year-old Sekhukhune will be consoled after she pulled off a brilliant run-out and took a catch.