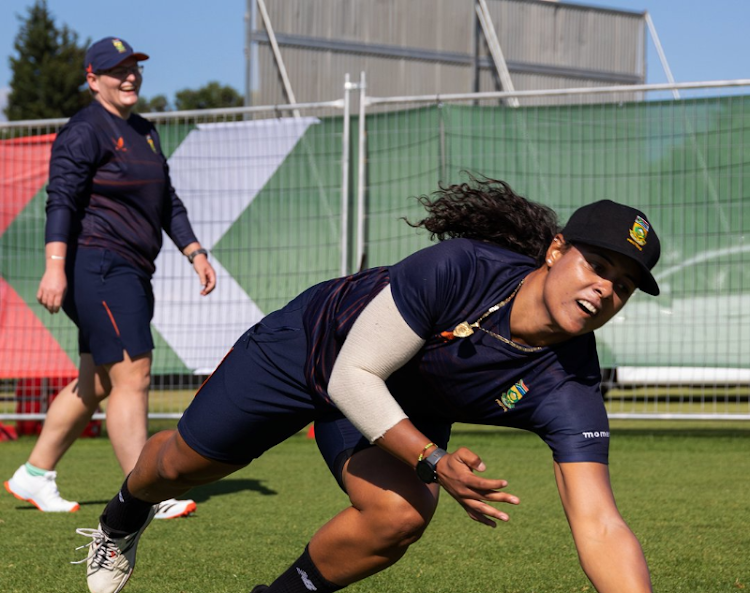 Chloé Tryon takes a catch during practice as Lizelle Lee enjoys a light moment behind her.
Image: @OfficialCSA/Twitter

SA are aware that they can’t afford another sloppy performance when they take on Pakistan in Mount Maunganui, New Zealand, in their second ICC Women’s Cricket World Cup match on Friday.

The Momentum Proteas, who are ranked second on the ICC ODI rankings, tottered to a 32-run win over debutants Bangladesh in their first match.

Vice-captain Chloé Tryon said the performance against lowly Bangladesh was unacceptable and called for improvements against Pakistan at the Bay Oval on Friday.

“We discussed it, that we weren’t happy with our batting performance. We didn’t take enough responsibility and we needed partnerships which we didn’t do enough of.”

Marizanne Kapp and Laura Wolvaardt top-scored with 42 and 41 runs respectively against Bangladesh and Ayabonga Khaka was crucial in the defence of a below-par target of 207 as she ended with figures of 4/32.

“We worked on that after those conversations as we went into net sessions and making sure we are finding ways, despite looking at the wicket which was a bit slow, we still have to find a way to make 270-plus on these wickets.

“A lot of pointers to take out of the last game and we worked on that at training.”

While Pakistan are a lowly eighth in the 50 overs format and were whitewashed 3-0 by SA in an ODI series in Durban early last year, Tryon called for an improved performance and warned the Asians won’t be pushovers.

“We have played enough cricket against them to know what we are up against. They are a good squad and we don’t want to take any team for granted, so we have to make sure we play our best cricket tomorrow [Friday] and make sure if we tick our boxes we can end up on top.”

Pakistan are bottom of the standings after suffering two heavy defeats against Australia and India, but Tryon said SA will not take them lightly.

“They have players that can take the game away from us, so we have to make sure we do the right things.”

SA have had a week to prepare for Pakistan, but will only have two days to get ready for defending champions England at Bay Oval before a match against hosts New Zealand in Hamilton on March 17.

Given that the Women's Cricket World Cup is played in a league format where all eight teams face each other once, with the top four teams qualifying for the semifinals, SA will have to put Pakistan away to climb up the standings before testing matches against holders England and hosts New Zealand.

The Proteas still have high-flying Australia and West Indies to play.

Lizelle Lee is expected to feature after missing the first match to bolster the SA top-order.