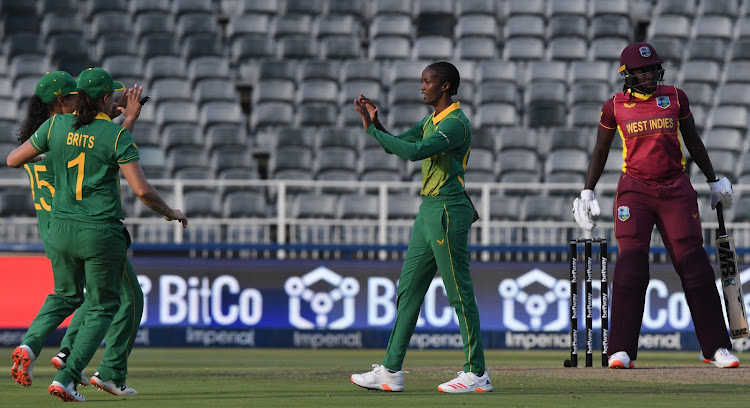 Ayabonga Khaka celebrates with her Momentum Proteas teammates after she took her maiden five-wicket haul during the second ODI against the West Indies at the Wanderers in Johannesburg on January 31 2022.
Image: Sydney Seshibedi/Gallo Images

Momentum Proteas stand-in captain Suné Luus believes the challenges posed by the Wanderers pitches in the ongoing ODI series against the West Indies could not have been better preparation for the pitches they will find in New Zealand, where the ICC Women's Cricket World Cup will take place from March 4 to April 3.

SA and the West Indies are using the four-match series, which concludes on Sunday, as final preparation for the World Cup.

Luus said the wet weather that has soaked Johannesburg has made pitches at the Wanderers similar to what they can expect to find in the six host cities of Auckland, Christchurch, Dunedin, Hamilton, Tauranga and Wellington.

"It was quite difficult early on," Luus said after the West Indies won the Super Over to clinch the second ODI in a low scoring match on Monday.

"We have obviously had quite a bit of rain and the openers felt it was a bit sticky and too paced, and that kind of made it difficult for them to play their natural game.

"They had to be build a partnership and kind of build a platform for the middle order to come in and explode."

Even with a half-century opening stand, the middle order did not explode.

In a match reduced to 41 overs a side due to rain the tourists blew SA away for 160 and paced their chase with precision, until the SA bowlers slammed on the brakes, with Shubnam Ismail turning the match on its head as she trapped Shakera Selman to leave the scores tied at 160.

"I think there was a length on this wicket and the West Indies bowlers bowled it more often than not," said Luus.

SA were nine runs short in the Super Over in the end as the West Indies took a 1-0 lead in the four-match series after Friday's opening match was washed out.

The pitch conditions SA and the West Indies are faced with at the Wanderers can be expected at the World Cup, said Luus.

"I think in some places where we are going to play the conditions might be similar.

"I know there is a lot of rain in New Zealand in most places where we are going so I think this is an ideal situation for us.

"I don’t think we can get any better preparation.

"I think it is good preparation and the tougher it gets for us the easier it will possibly be when we get to New Zealand."

The third ODI against the West Indies is on Thursday as SA will look to square the series and make Sunday's final match an intriguing decider to look forward to.

SA, Australia, England and India qualified for the World Cup on the basis of their position in ICC Women's Championship from 2017 to 2020 while New Zealand automatically qualified as they were hosts.

Bangladesh, Pakistan and West Indies are the other contenders.

The tournament will be played in the league format, where all eight teams will face each other once, at the end of which the top four teams will qualify for the semi-finals.